Home » Environment » Conservation on the ground: how traditional fishermen saved sharks in Madagascar 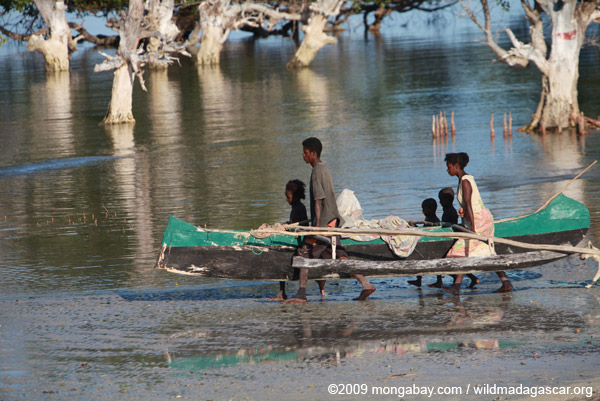 Malagasy family helping fisherman take his boat out to sea . Photo by Rhett A. Butler.

Or, Guitarfish a Go-Go- Bribes and barrages in Belo-sur-Mer

YOU’VE got to admire the mettle of people who, despite the cards being seemingly insurmountably stacked against them, can still stick to their guns and stand up for what they believe in.

I didn’t give them much of a chance, but nevertheless, there they went, one-by-one, to stand in front of the assembled group of villagers and local authorities who had packed themselves into the sweltering cinderblock and sheet metal town hall. Each to express their exasperation over the arrival and unrelenting progress of the monstrosity that had come to be known simply as “the barrage”- a 4 kilometre long (although by some accounts as much as 8 km long) bottom-set fishing net aimed at catching sharks and guitarfish for their high value fins. Everyone who stood to say their bit that afternoon knew that healthy amounts of money had likely already passed into the hands of various authorities in the interest of a blind-eye being turned. Still, undaunted, there they went, to air their qualms, for better or worse.

“I mean, come on, the name gives it away – a “barrage”… barrages, by definition, block everything that comes their way. Obviously this is not in the interest of us local fishermen!” pleaded an exasperated Franҫois, the president of the local youth association.
Another young fisherman put it more bluntly: “If we allow this to continue, all that our grandchildren will know of sharks is from a picture in a book.”

The response by the representatives sent from the 70 strong team of shark fishermen who mostly hailed from Diego Suarez, a regional city at the northern tip of Madagascar, a few thousand kilometers away, was that all of their paperwork was in order, they all had their cards which proved they were registered traditional fishermen, their nets were of legal mesh size, and they were not breaking any Malagasy fishing laws. In a poverty-stricken country wrought by political turmoil, corruption and inadequate fisheries legislation, it’s quite possible they were right.

Be that as it may, considering the disparity between their 4+ kilometre shark nets and motorised vessels (bankrolled by a Chinese investor who had been denied a fishing permit by the National Fisheries Ministry, as one of them divulged after a few too many beers one evening) and the 100-200m nets cast from traditional dugout canoes by the local fishermen, it seems absurd to suggest that this is fair play.

The debate became more heated, as the “barrage-ists” became agitated, insisting, “There’s nothing you, the villagers, can do to kick us out. We’re going to keep fishing, like it or not!”

I tend to take a back seat in these type of meetings, and let the community take the lead, but I hastily pointed out that not one of the community members had mentioned kicking them out, simply that the size of their nets was unacceptable, and that they were welcome to stay if they used fishing gear more in-line with what the locals use, and more in the interests of promoting local sustainability. I suggested that their haste to mention that they were being kicked out was perhaps a sign of paranoia and indicative of the fact that they knew what they were doing was wrong, regardless of its legality.

As the meeting descended into chaos, and the unlit town hall descended into darkness, it was agreed that the barrage fishermen would produce all of their paperwork the next day (oh no, not the next day, as it’s a Sunday, and everyone needs their day off, but the day after that. . . ) which would then be sent to the regional authorities, and then on to the national authorities for verification, and then back to the blah blah blah. . . An accomplished exercise in buck-passing and stalling, resulting in a bureaucratic marathon that would surely result in the extirpation of the local shark population before anything was decided or actionable.

The meeting having achieved very few tangible results, the community hatched a plan. With the Kirindy-Mite Marine Protected Area (MPA) having recently received official protected status, they would secretly follow the barrage fishermen out the next morning when they checked their net, and verify whether or not the net was placed within the MPA limits. Spies staked out the barrage fishermen’s camp, and as they left just before dawn the next morning, one boat headed south and one headed north to check on their massive nets, the community members sprung into action. Cell phones relayed the trajectory of the two boats, and the one headed south was soon being tailed at a distance by a motorised canoe with angry, GPS and digital camera wielding fishermen and representatives of the National Parks Service.

Despite their repeated claims that their nets were not being placed within the MPA, there it was, clear as day, about one kilometre north of the island of Nosy Andriangory, smack dab in the heart of the protected area. After a brief verbal exchange, the net was hauled in, and within days the Captain of the regional police had been called to the village and the law had been laid down: If they wanted to avoid going to prison, the barrage fishermen were to get all of their nets out of the water immediately and were to leave the village within a week.