Posted By Mongabay on Nov 30, 2011 in Uncategorized 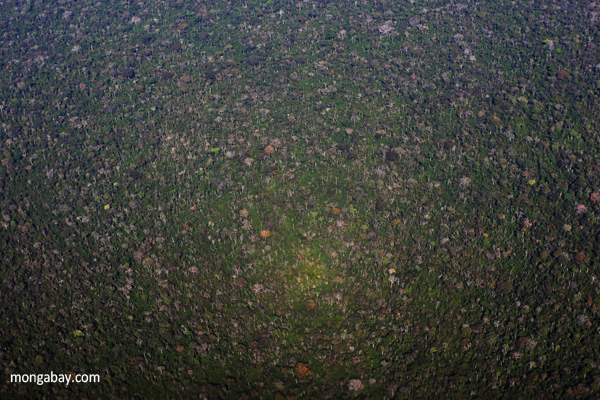 Regular Mongabay readers are probably familiar with World Growth International, the non-for-profit (*) advocate for industrial forestry that masquerades as a poverty alleviation organization. World Growth is headed by Alan Oxley, a lobbyist who served as Australian Ambassador to the GATT, the predecessor of the World Trade Organization, during the late 1980s. Oxley also heads ITS Global, which provides advisory and marketing services to outfits like Asia Pulp & Paper and Rimbunan Hijau typically when they are criticized for environmental transgressions.

This time of year is usually a busy time for World Growth, which typically issues a spate of reports, press releases, and mailings to coincide with international climate talks. 2011 is no different — in November World Growth has sent at least five mailings. Since World Growth has four of my email addresses on their list (which it appears to share with the similarly-themed Consumer Alliance for Global Prosperity and the Initiative for Public Policy Analysis), I have received 20 messages from Mr Oxley and his cohorts this month.

While unrequested 20 messages is a bit of an overkill, I do enjoy skimming World Growth’s material for mistakes, hypocrisy, and outright misrepresentations. I am never disappointed.

For example in today’s mailing World Growth complains that environmental campaigners cannot be trusted with data. It cites recent reports from WWF and Greenpeace, two of World Growth’s favorite targets (also on the list are the Rainforest Action Network, The Forest Stewardship Council (FSC), and the Rainforest Alliance, all of which have less than cordial relations with Asia Pulp & Paper, an Oxley client). The mailing says WWF’s report used improper citations when it asserted that much of Southeast Asia’s plantation expansion since 1990 has occurred at the expense of natural forests.

While World Growth’s point about proper referencing is certainly valid, what makes it particularly amusing is World Growth is guilty of exactly the same thing. World Growth has routinely misrepresented information in its reports, as mongabay has documented in the past. For example in two of its reports, World Growth International misattributed views to Frances Seymour, the Director General of CIFOR, a forest policy research institution. World Growth International said Seymour, when speaking at a U.N. Food and Agriculture Organization event in 2009, blamed subsistence farmers for most deforestation, but a review of the transcript from her talk does not support this interpretation. Speaking with mongabay.com, Seymour flatly denied the notion that the poor are primarily to blame for deforestation today. Meanwhile in November 2010, the group run by the late Wangari Maathai, the 2004 Nobel Peace Prize winner for her tree-planting campaign in Africa, blasted World Growth International’s Oxley for using her name to imply that she supports the large-scale conversion of tropical forests for industrial plantations.

In the case of Greenpeace, today’s newsletter asserts that the lab which did testing of fiber samples for the green group “distanced itself” from Greenpeace’s claims that packaging from Asia Pulp & Paper contained rainforest fiber. Yet the lab has done no such thing — the letter from the lab doesn’t clear Asia Pulp & Paper. Furthermore Greenpeace has clearly said its campaign is based on a range of evidence of which fiber testing is only a part. World Growth conveniently ignores this, although it does try to muddy the waters by highlighting a Malaysian mill that sources fiber from rainforests.

William Laurance, a tropical ecologist from James Cook University in Australia who has been an outspoken critic of World Growth and Oxley, agrees.

“When it comes to getting facts right, the hypocrisy of Alan Oxley and World Growth is quite astounding, in my view,” said Laurance, who earlier this year debated Oxley at Australian National University. “When I highlighted some of the egregious ways that World Growth had distorted or misrepresented information, Oxley actually threatened to sue me. That was positively laughable, given that I was spot-on with my facts.”

I’m sure we’ll see a lot more from Oxley and World Growth over the next week-and-a-half. Whether or not anyone is still listening is another question.

* While World Growth International is a not-for-profit, Alan Oxley is rewarded quite generously for his efforts. According to tax filings, he was paid roughly $10,000 an hour of work in 2008. World Growth itself doesn’t disclose its funders and Oxley is on the record saying this information is “immaterial”.