Posted By mongabay on May 9, 2013 in Photography, Photos, Wildlife 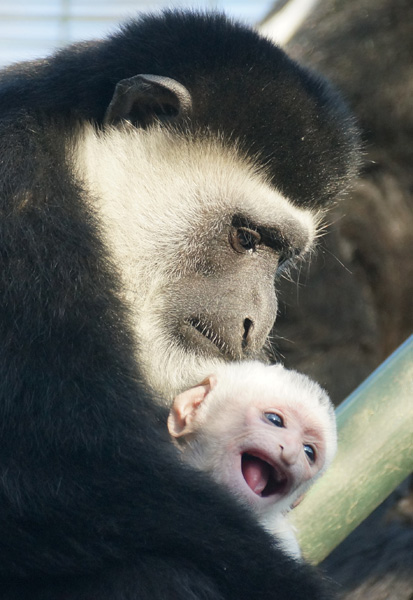 The ZSL London Zoo welcomes baby Anvil, an Eastern Black and White Colobus monkey who is the new pride and joy of her mother, Sophia. Even though there is a stark contrast when it comes to appearance between mother and daughter, the jet-white newborn will eventually become black and white and better resemble her mother once she gets older. Anvil’s aunty Thumbelina is the only member of the family that is allowed to hold and cuddle with the two-week old baby, and if often spotted showing off her adorable nephew to excited onlookers at the zoo.

The Eastern Black and White Colobus species of Old World monkeys naturally reside in the forests of Africa, and eat mainly fruit, leaves, flowers, and twigs. Because of their herbivorous diet, they are important for seed dispersal from their sloppy eating habits and their digestive systems. These monkeys are vital creatures to Africa’s ecosystem, and unfortunately they are popular prey for Africa’s forest predators and are threatened by bushmeat trade from hunters, logging, and habitat destruction.