Posted By mongabay on Jul 11, 2013 in Environment, Uncategorized

Laguna de Apoyo, a volcanic crater lake between two of Nicaragua’s most populated cities, is known as a tourist destination for locals and backpackers. This section of  tropical dry forest is part of a corridor that is vital for many long and short distance migrations. Unbeknownst to many visitors, this site is also rich in pre-Columbian history and biodiversity. Ancient Chorotega petroglyphs remain intact and often unvisited, wrapped in the roots of chilamate trees. The vibrant Turquoise Browed Motmot, the national bird of Nicaragua, can be sighted eating Jacote fruits when they are in season.

Since the creation of the reserve in 1991, Estacion Biologica Proyecto Ecologico has produced research and partnered with the Ministry of Environment and Natural Resources  to protect the threatened ecosystem. Currently funded by the Nicaraguan Organization FUNDECI, it is the only research facility in the reserve. This protected area is home to a variety of flora and fauna, some of which evolved inside the 24,000 year old crater. Many unique species of fish have been discovered within the freshwater laguna, but there are still plants and animals that are yet unstudied. 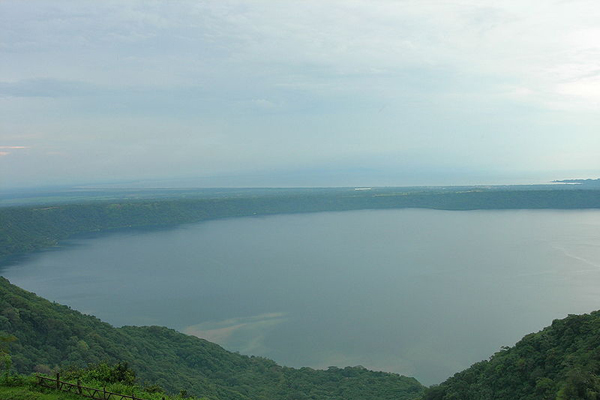 Unfortunately, Estacion Biologica struggles against development and environmental degradation within the reserve as scientists and volunteers from around the world attempt to learn about this seldom studied ecosystem. Funding can be scarce for research and outreach programs, and there are many paradigms to battle. Promoting awareness and providing environmental education for the community is a massive effort. Considering the problems with waste disposal nationwide, the Nicaraguan Government has recently adopted slogans in an attempt to encourage people not to litter. While this represents a step in the right direction, there is much progress left to make before Nicaragua adopts an anti-littering culture.

Estacion Biologica is allied with the local high school, which has recently begun to collect plastic bottles for recycling. The teachers and students benefit from the money that the recycling earns, as well as from the value of the program for teaching the benefits of environmental sustainability. The students within the local schools often participate in service activities like lake clean ups and reforestation projects. This type of community engagement allows them to gain experience caring for the Laguna.

The shores of the Laguna de Apoyo, although cleaner than other Nicaraguan lakes, are still littered with plastic debris left by visitors. The government has provided trash cans within the reserve, but many people don’t use them. According to Dr. Jeffrey McCrary, the Director of Estacion Biologica, “The situation in Nicaragua parallels the situation in the United States 50 years ago…It’s a tough problem. It’s sort of seen as a victimless crime by a lot of people.”

Teaching Earth Rights and helping Nicaraguan youth to see the interconnectedness of actions and environmental impacts is no small task. While we are all victims of the tragedy of the commons, it is especially challenging to address environmental issues in developing countries.  Problems such as deforestation and waterway pollution, common to many developing countries, weigh heavily on Nicaragua. While the government is responding to some of these problems, it faces many economic challenges that often inhibit preservation efforts. The Laguna de Apoyo Reserve is just one at risk area, among the 78 protected areas in the contry.  Nicaragua is the poorest country in the the Western Hemisphere behind Haiti, but it contains many biodiversity sites that require protection.

In spite of the many challenges, many small organizations like Estacion Biologica continue to make a small but meaningful impact.The increasing popularity of Nicaragua for tourism could represent a threat to the environment, but perhaps it is possible to nurture a symbiotic relationship between tourism and nature. Laguna de Apoyo is a hidden gem that retains a rare exotic charm. Tourists are attracted by the opportunity to watch howler monkeys feasting on mangoes in the trees above their heads. The fireflies come out in abundance at night, especially before the rain. Hopefully, with the efforts of local nonprofits like FUNDECI, these environmental treasures can be preserved for future generations.