Home » Environment » Indonesians working together to save Sumatran tigers

Indonesians working together to save Sumatran tigers

Posted By mongabay on Oct 29, 2013 in Environment, Photography, Photos, Wildlife

Indonesians are committed to ensuring the persistence of Sumatran tigers. The gamut of island-wide conservation efforts was discussed this week in Padang, West Sumatra, during the annual meeting of HarimauKita (harimau means “tiger” in Indonesian), which brought together a consortium of stakeholders for Sumatran tiger conservation. Members worked late into each night to coordinate and evaluate existing research and conservation efforts across all 8 Sumatran provinces.

Discussions focused on accurately tracking tiger populations (no easy task), mitigating human-tiger conflict, such as attacks on humans or livestock, and connecting tiger forest habitats, such as with habitat corridors. To track tiger populations, HarimauKita reviewed the activity of 19 ongoing research programs spread across Sumatra, most of which primarily employ camera traps. HarimauKita members working in these landscapes reported high tiger occupancy in some previously logged forests and in forests fragmented by agricultural expansion. While this offers a glimmer of hope for tigers in the face of Sumatra’s rapid forest conversion, poaching and human-tiger conflict also continue to be an issue, particularly in areas with high human activity, such as near villages or plantations. Notably, Mrs. Katrini of the TKA oil palm grower described TKAs construction of a tiger rehabilitation center to facilitate the capture, relocation, and release of problem tigers.

HarimauKita’s strategic conservation programs, such as training anti-poaching teams, and spirit of collaboration that facilitates effective communication among stakeholders, are integral to insuring that the Sumatran tiger does not follow in the footsteps of Indonesia’s two other extinct tiger subspecies. HarimauKita’s approach and role in tiger conservation may well become a model for other species conservation. 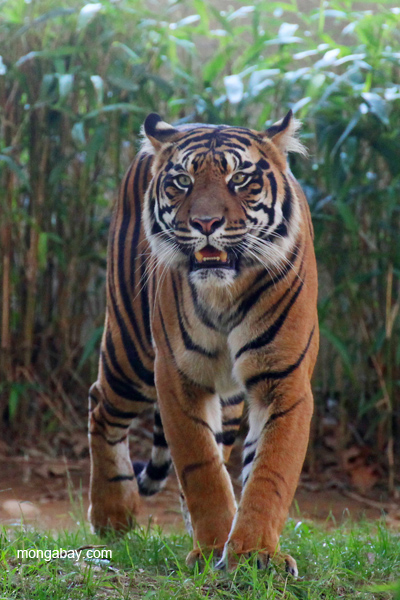 Photo by Rhett A. Butler / mongabay.com