Posted By mongabay on Oct 31, 2013 in Environment, Photography, Travel, Wildlife

By Simon Bradley and Tammy Mildenstein

It’s Halloween time again, and around much of the world people are decorating with images of ghosts, vampires, witches, black cats, and, of course, bats.

For the superstitious, there may be nothing scarier than the flying foxes of the Philippines, whose 2-meter wingspans make them the largest bats in the world!

In keeping with a popular fear and mistrust of nocturnal animals, Philippine flying foxes (which are actually fruit bats) are associated with a rogue’s gallery of eerie spirits that haunt Philippine nights and minds. While entertaining and spine-tingling, the lingering power of these associations can present challenges for bat conservation, but can also open up opportunities for engaging with the public. Tammy Mildenstein of SOS – Save Our Species project Filipinos for Flying Foxes, describes some of the legends she has encountered in her time working to protect these creatures. 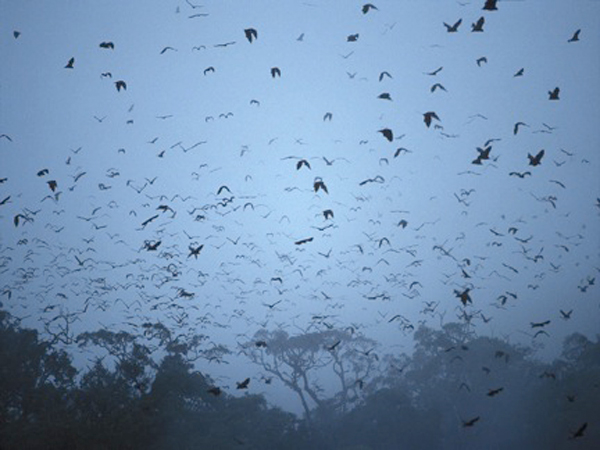 The evening departure of thousands of flying foxes overhead could send the superstitious running for cover. Credit Tammy Mildenstein, Filipinos For Flying Foxes

Perhaps, most closely resembling this magnificent bat is Manananggal whose legend mirrors the same distribution pattern throughout Southeast Asia as flying foxes. This “aswang” – a Filipino term for a variety of vampire-like creatures – is a woman by day, but transforms into a fearsome predator after dark. As families prepare to slumber, Manananggal’s torso detaches in the middle, while the upper half grows bat wings allowing her to fly through the night in search of her prey: unborn babies. According to the myth, Manananggal lands on the roof of a home and drops her long, needle-thin tongue into the belly of a pregnant woman in her sleep to feast. Grisly and chilling? Yes. True? Unlikely, but a great ice-breaker for talking about flying foxes and setting the record straight on the true cultural and economic value of flying foxes, according to Tammy Mildenstein.  Flying foxes are fruit bats, she explains, they don’t feed on human blood much less unborn babies.

Indeed there are others in the menagerie of mythological and winged menaces – all seemingly drawing inspiration from the Philippines’ rich diversity of bat species. For example there is  Tik-tik and Wak-wak – both similar to Manananggal, named respectively, for their “tik-tik” nocturnal calls and the “wak-wak” sound of their airy flapping wings, both of which are reminiscent of the sounds made by flying foxes in flight at night. Yet another is Tiyanak – a creature in the form of a human baby, but with fangs and sharp claws that flies away as a black bird. Capre and Tikbalang take on other animal forms, and are said to be found in fig trees at night with red reflective eyes just like fruit bats.

Meanwhile, aside from inspiration for scares at bedtime, scientific research has shown these amazing creatures are vital to human survival. As pollinators and seed dispersers, flying foxes for example, are essential for maintaining natural forests, often the only source of fresh water, air, and timber and non-timber forest products. Flying foxes are also known to pollinate hundreds of agriculturally important crops for the region, explains Mildenstein.

Ironically, being nocturnal it is flying foxes which can become easily stressed by diurnal human presence near their nest sites. That is why a central component of the Filipinos for Flying Foxes project is to establish six roost sanctuaries to boost species populations allowing the bats and local communities to live in harmony.

So the legends may live on, and keep a couple of kids awake at night, but maybe if Filipinos for Flying Foxes is successful, staying up past bedtime will be to marvel at the sight of the world’s largest bat taking to the sky as darkness falls….all around you! Mwuhahaha! Happy Halloween! 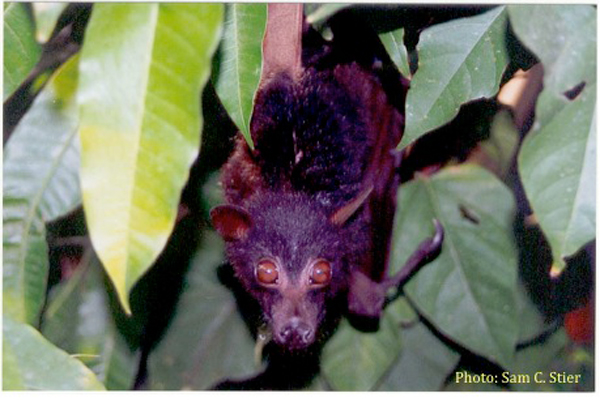