Reporter’s Journal: The forests of Uganda

In late January through early February I traveled to Uganda as part of the first Mongabay Special Reporting Initiative (SRI) to report on “the next big thing in tropical forest biodiversity conservation.” I’m a world traveler, and I have a special passion for tropical rainforests — having seen them in Australia, the Peruvian Amazon, Asia, and Central America. Africa was my last continent to visit (OK, does Antarctica count? I have not yet been there). I have dreamt of tracking mountain gorillas in the wild since I was 14 years old. I grew up watching National Geographic documentaries of Dian Fossey and Jane Goodall (who celebrates her 80th birthday on April 3rd!). And so I thought that seeing mountain gorillas and chimpanzees would be the absolute highlight of my reporting adventure, but it was the people who grabbed my heart. 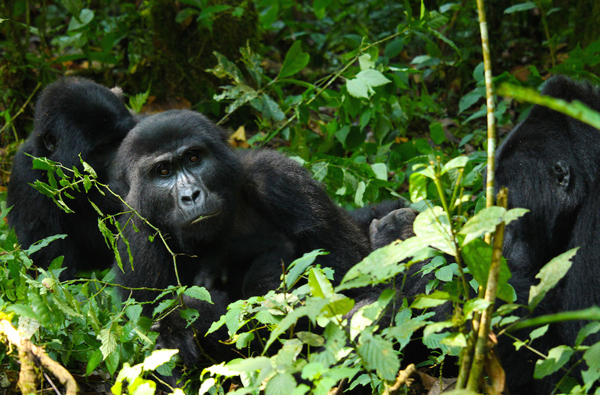 My heart was torn by the poverty, particularly the Batwa people, the indigenous forest “pygmies” who were evicted from their former home in Bwindi Impenetrable Park just in 1992 — and also by the generosity, kindness and sacrifice of many Ugandans who are working to improve conditions for others. The Batwa now live in extreme poverty, in conditions that left me in tears. As a journalist and as someone who has seen a lot of poverty around the world — ranging from simple homes and dirty kids to desperate street urchins begging for cash — I have never seen despondency in a child’s eyes in the way that I saw in the Batwa children. The Batwa became “conservation refugees” when Uganda established Bwindi as a national park; they were given no land of their own. They lost their culture, their way of life, and they are still finding their way in a new world.

Although the intent of designating Bwindi as a national park was to save mountain gorillas and the forest ecosystem, research by the late Elinor Ostrom, who won the Nobel Prize in Economics in 2009, showed that “nationalizing” forest ownership often counterintuitively fails to preserve them; instead, she found that it can lead to a “free for all” on accessing forest products — such as wildlife, firewood, plants for medicine, or wild honey. Before a park gets established, villagers can usually access the forest legally and they often have rules that work for everyone, but afterwards, governments typically restrict all locals from access. This causes traditional, local rules to disintegrate, and the absence of locally agreed on rules leads to overexploitation. Intriguing.

Even more interesting, this exact scenario has been shown true for the Batwa living in forests in Uganda. Makerere University Professor Abwoli Banana studied five community-managed forests, and found that the Echuya forest, which had Batwa (sometimes called Abayanda) living within its borders at the time of his study, had the least illegal poaching and firewood harvest by other locals, who were only allowed forest access one day per week. The Batwa acted as forest monitors, keeping an eye on the forest; Ostrom herself found that having forest monitors helps people’s livelihoods and it helps forests. Professor Banana conducted the study before the Batwa were evicted, and some data suggests that poaching and other illegal activities have not diminished in Bwindi Park since the park’s establishment. The Ugandan government has started to move away from strict protectionist policies, and they now allow some people to access to the forest — though the poorest people with the most need generally have benefitted the least.

The SRI topic that I chose was how Ostrom’s groundbreaking research can be used to help save tropical forests. She outlined eight “design principles” that support the sustainable management of natural resources. Together, these principles suggest ways to resolve the apparent social-ecological dilemma between saving forests and reducing poverty. It’s a topic that has not received extensive coverage outside of select publications, but is absolutely fascinating and important. And from my reading and from speaking to her colleagues, Ostrom was a true hero, the kind of woman who comes around only rarely — a deeply kind and compassionate woman, an incredibly productive researcher, a genius, and a firebrand. She was not afraid to call out entrenched economic theories as “dangerous” — like making policy on the assumption that people can’t and won’t work together to create productive solutions that not only can conserve forests but also improve livelihoods. The best way according to Ostrom? Empower the local people. Give them a say in how forests are managed. I only wish I had met her before she passed away in 2012.

Look for my work to come in publications such as Animal Planet Online and Environmental Health Perspectives, and others. And, of course, on Mongabay. 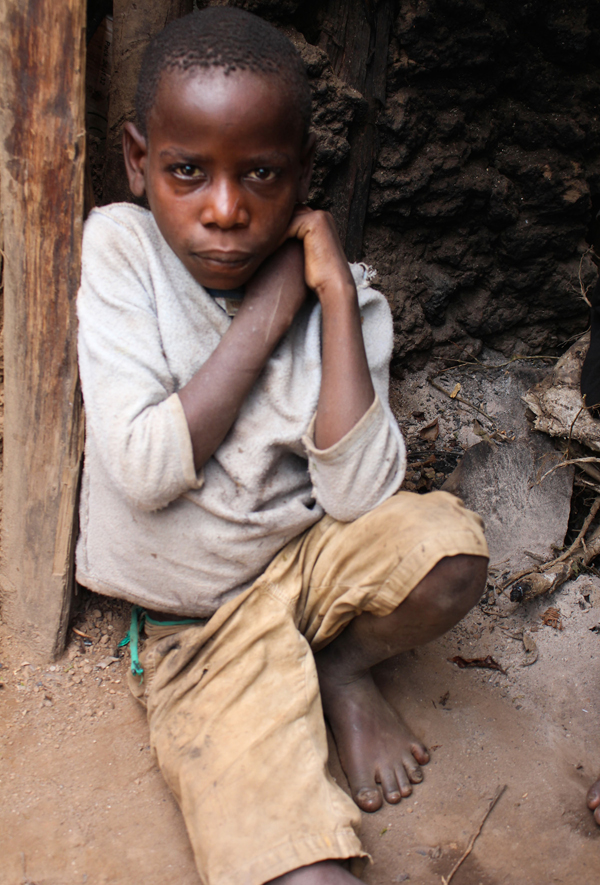 A young Batwa boy in his home at the edge of Bwindi Impenetrable National Park — where his parents and ancestors had lived until being evicted from the forest in 1992. Photo Copyright (c) 2014 Wendee Nicole.

This post is published under an Creative Commons Attribution-NoDerivatives 4.0 International license.  If you would like to reprint this piece, unchanged, be sure to list the credit as: By Wendee Nicole under Mongabay.org’s Special Reporting Initiative Program.