In Search of Lost Frogs: The Quest to Find the World’s Rarest Amphibians – book review

Posted By mongabay on Oct 24, 2014 in Environment, Wildlife 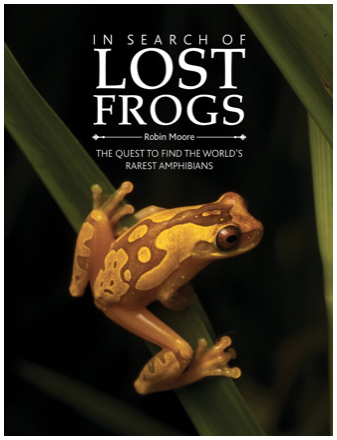 In Search of Lost Frogs: The Quest to Find the World’s Rarest Amphibians describes the great quest to rediscover long-lost and presumed extinct frogs, toads, and salamanders not seen between 15 and 140 years ago. Since the turn of the millennium, over 250 amphibians have not been seen or recorded by science – many now presumed extinct – and it is estimated that over half of the Earth’s 7,000 amphibians are currently threatened with extinction.

By 2013, roughly 933 of the Earth’s 7,000 known species of amphibians were threatened with extinction. Many causes led to this extinction crisis, including habitat loss, deforestation and degradation, chemical dispersion, invasive plants and animals, degradation of the hydrologic cycle degradation, and global warming.  But few have proven as devastating to date as the chytrid fungus. Chytrid fungus, which leads to the highly-deadly skin disease chytridiomycosis in amphibians, may be partially responsible for over 100 amphibian extinctions since the 1970s.

After witnessing these trends first-hand, world renowned conservationist and nature photographer Dr. Robin Moore, with Conservation International and The Amphibian Survival Alliance, organized 33 teams globally in 19 countries on 5 continents in 2010 to search for evidence of 100 elusive frogs not seen in over a decade. Many of these amphibians were presumed extinct. By organizing communities and local conservationists to look for these “lost frogs,”—which also included salamanders and other amphibians—scientists could get a better sense of the current amphibian extinction tsunami, and maybe even save a few species before they vanished.. The new book, In Search of Lost Frogs: The Quest to Find the World’s Rarest Amphibians, tells this story.

In Search of Lost Frogs: The Quest to Find the World’s Rarest Amphibians you will learn about valiant efforts to save Earth’s most threatened amphibians in some the most dangerous places on Earth. Startling success stories will keep you in suspense while dramatic failures will inspire you to protect all of Earth’s species. Peppered with gorgeous photos by Moore, the book is a gritty, determined, realistic, and, at times, even hopeful story that is a must read for all of us who want to protect species on Earth.