The time is 6:30 am, a faint glimmer of light is just breaking the horizon revealing gnarled epiphyte laden trees still dripping from the rains that had passed through earlier in the morning. In the distance the piercing call of a Wattled Guan cuts through the morning air. I think to myself how lucky I am, as the remnant cloud cover seems to evaporate away leaving a crisp, still morning. Perfect conditions for viewing the Andean Cock-of-the-Rock lek that I had torn myself away from the comfort of my cabana and hiked through the forest in the hope of witnessing. The first sign of Cock-of-the-Rock manifests as a rustling of wings, the shake of a branch and then a startlingly loud call from just above the foliage blind concealing me from the lek site. Tense with excitement, I patiently wait whilst the sun continues its ascent, all the while more birds flock to the scene and enter the fray, a song and dance where male Cock-of-the-Rock compete for the right to mate. 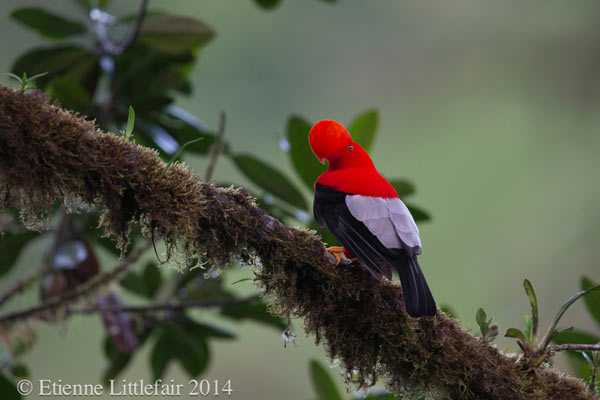 A male Cock-of-the-Rock astride his mossy perch.

This early experience during my stay at Santa Lucia was to set the scene for three weeks of immense joy and wonder inspired by the natural world. In my time at Santa Lucia I conducted herpetofauna surveys as part of a team of ecologists from various universities working with Operation Wallacea, a UK based conservation charity. This opportunity gave me many insights into Ecuadorean life, and hammered home the need to protect remaining primary forest habitats.

Santa Lucia is a cloud forest reserve situated in the Ecuadorean province of Pichincha, close to the small town, Nanegal. The reserve is owned and run by 20 families within the local community whose economy was historically based on agricultural produce, particularly sugar cane. Following a government act granting legal protection to the forest in 1988, the local people had to adapt their land use in order to maintain their livelihood and income. In the late 90’s the construction of an eco-lodge situated on a high panoramic ridge began. The mission statement of Santa Lucia is ‘to create jobs and other benefits by means of a well run ecotourism business which allows us to conserve the forest and which respects the values of cooperative members and those of the community.’ 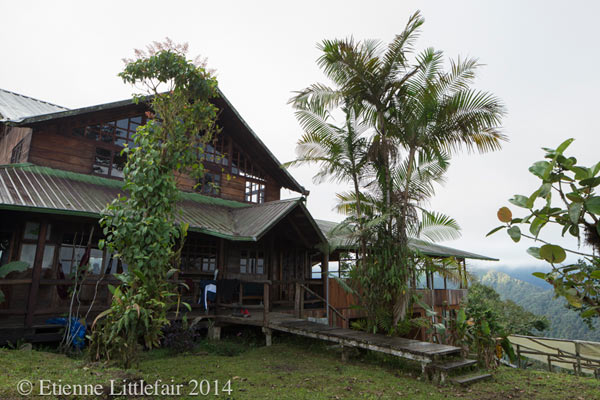 My first view of the lodge upon arrival, the lodge itself was constructed using materials from the forest, and much of the excellent food served at mealtimes is grown at the lodge. 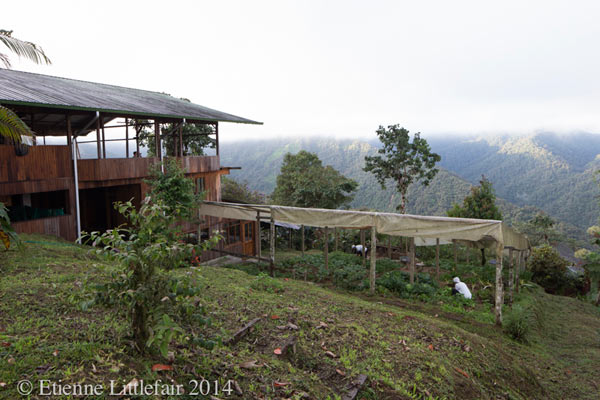 The lodge today is set up to cater for all manner of eco-tourists, those who wish to spend day and night prowling the forests in search of elusive species, and those who wish to relax and soak in the scenery. As well as catering for tourists, the lodge has a purpose built field laboratory and facilities for lecturing making it a fantastic base to conduct field courses and research forest ecology. 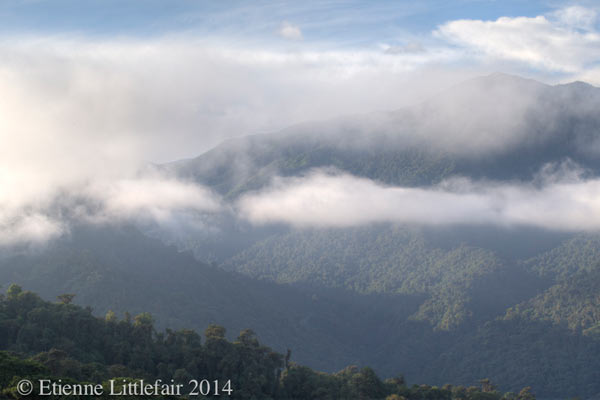 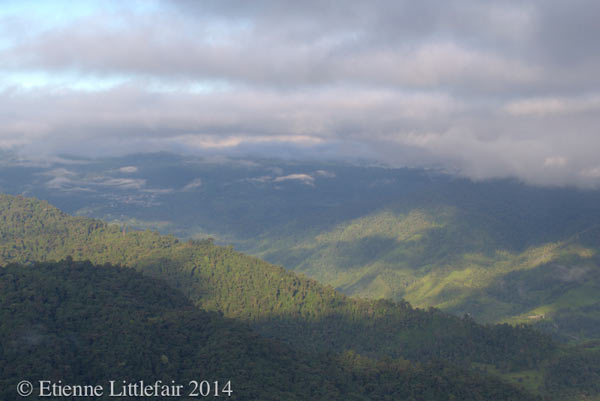 The stunning views from the lodge showcase the beauty and fragility of the Andean cloud forests within an increasingly human dominated landscape.

The reserve spans a wide altitudinal band from around 1500m to 2450m above sea level. The location and altitude of the reserve makes Santa Lucia a key area for Spectacled bears, a species classed as vulnerable by the IUCN. Santa Lucia is part of an initiative to form a ‘bear corridor’ facilitating seasonal movement of Spectacled bears from lower cloud forest areas into the higher páramo zone. A long term and on going study conducted by Dr Mika Peck of Sussex University aims to recognise individual bears within the reserve using facial markings discerned from camera trap images. This work allows population estimates to be made. 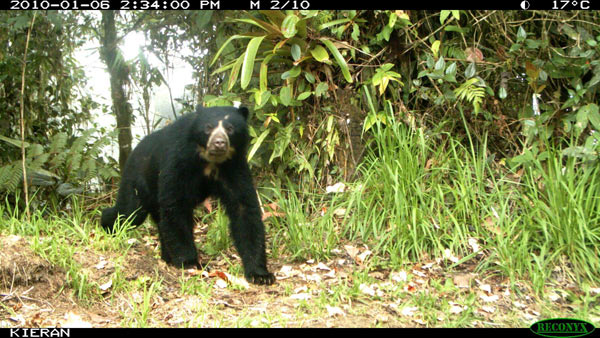 Threats to Spectacled bears include habitat degradation and direct persecution by landowners. Bears will occasionally venture into agricultural areas and feed on crops, which leads to conflict. Sadly in some areas bears are shot purely for sport. It is hoped that establishment of the bear movement corridor may help to alleviate human bear conflict. 18 additional species of medium to large mammal have been caught on camera within the reserve including such oddities as the Andean Wolf. 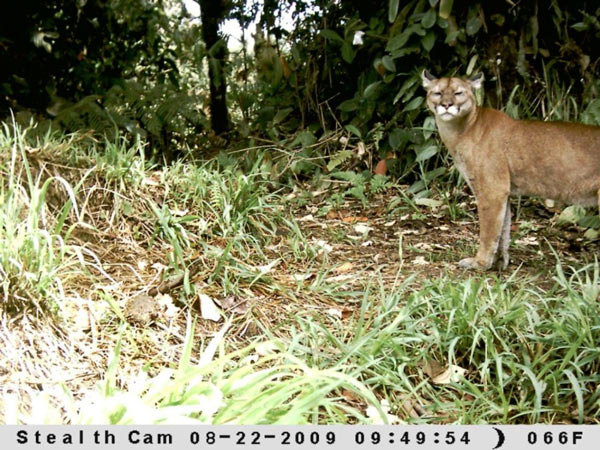 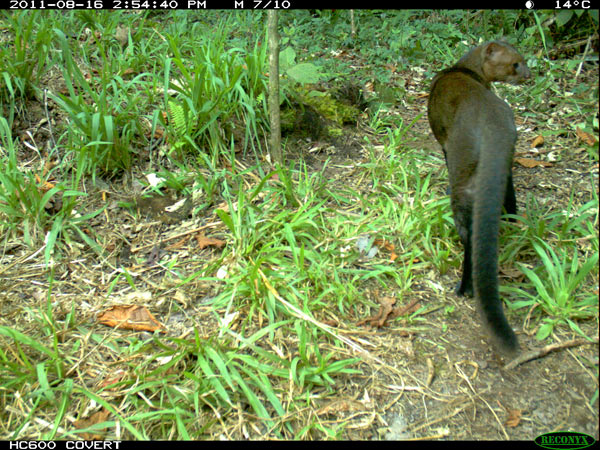 The staff of Santa Lucia are passionate naturalists, a fact made evident by the level of knowledge and skill displayed in the field. The reserve manager, Noe () is a particularly knowledgeable ornithologist. A highlight for any birder is the presence of Andean cock-of-the-rock, of all birds, amongst the most charismatic and sought after species inhabiting Andean cloud forests. There are also around 12 species of hummingbird present including the dramatic Booted racquet-tail and Violet-tailed Sylph. In total 405 bird species have been recorded in and around the reserve.

Whilst the birds and the large mammals are perhaps more evident and certainly better known within the reserve, the reptiles and amphibians are certainly their equal in beauty and mystery.  They also fulfill many important roles in the ecology of the cloud forest. At Santa Lucia I identified 13 species of amphibian including the Emerald Glassfrog (Espadarana prosoblepon), the bizarre Pinocchio rainfrog (Pristimantis appendiculatus) the endangered Goblin Rainfrog (Pristimantis sobetes) and perhaps most significantly Eugenia’s rainfrog (Pristimantis eugenia). Eugenia’s Rainfrog being a species closely associated with bromeliads and known from only a handful of cloud forest sites within an altitudinal range of around 300m. 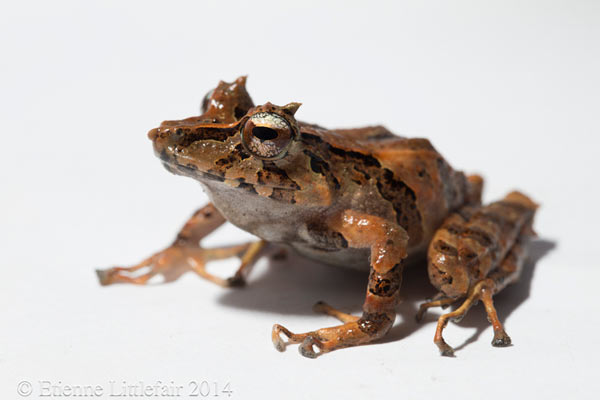 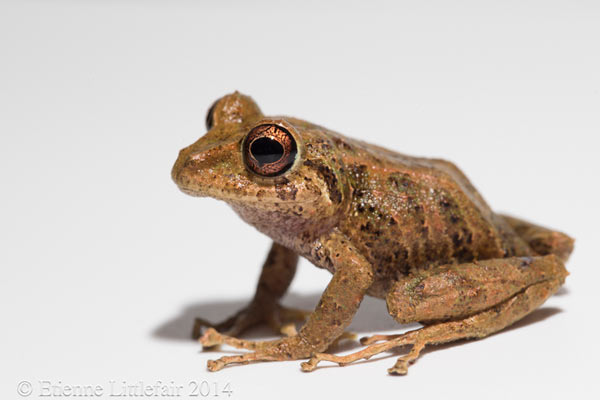 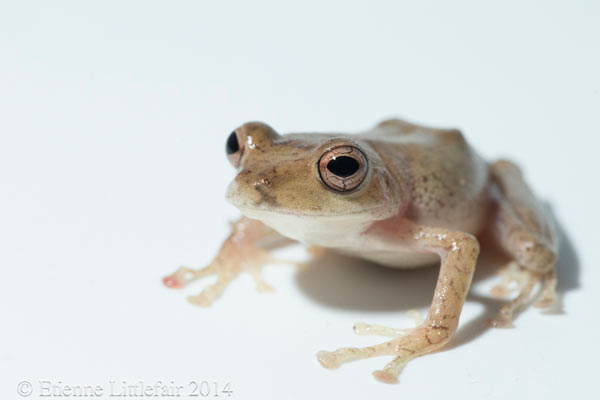 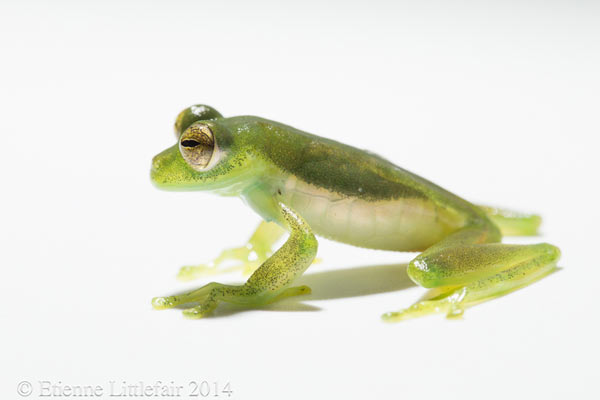 I identified 13 species of reptile within the reserve. Some highlights included the Elegant Snail Sucker (Dipsas elegans) a species endemic to the Western Ecuadorean Andes, the Giant groundsnake (Atractus gigas) a very rare, and likely Ecuadorean endemic snake first described in 2006. Also present and fairly abundant are at least two species of Anole, the Gem anole (Anolis gemmosus) and the larger Equatorial anole (Anolis aequitorialis). 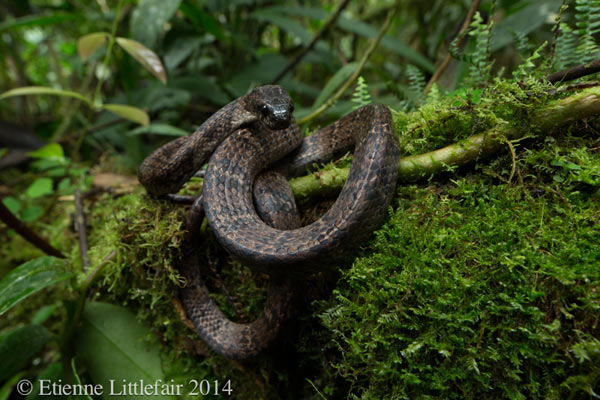 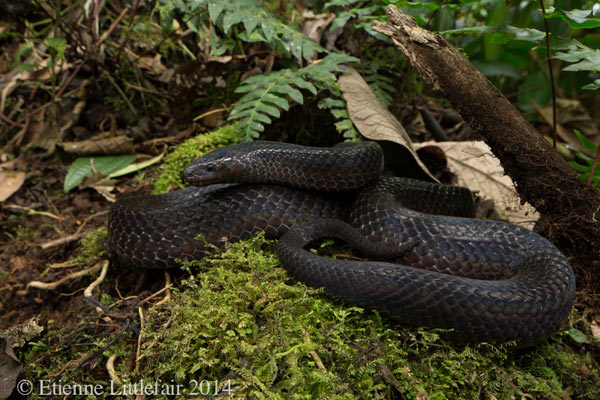 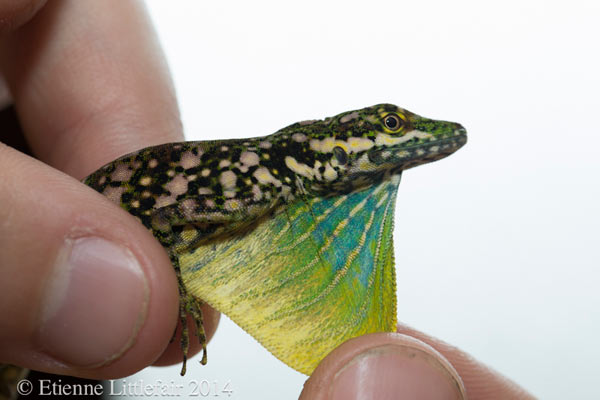 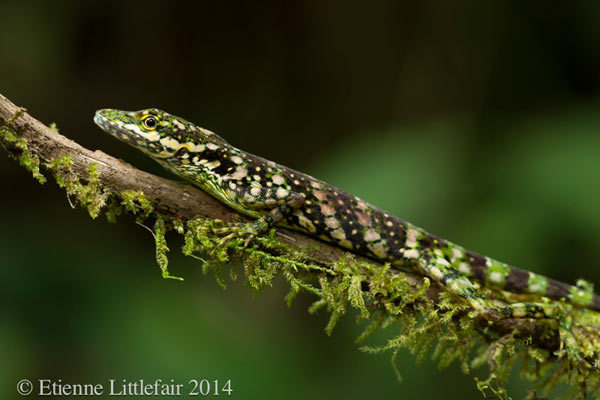 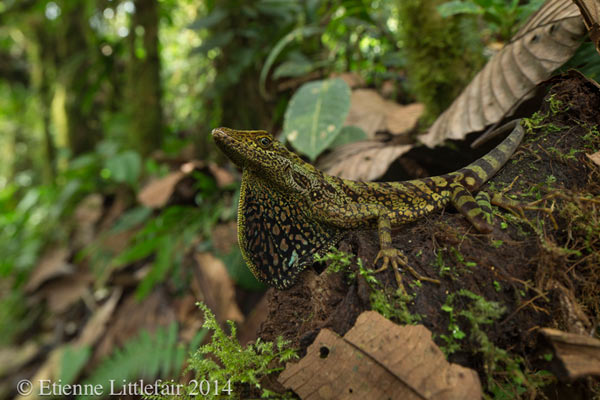 For me, this final image of a fast flowing stream, a prominent feature in the Santa Lucia landscape, reveals something of the character and mystery of the reserve. 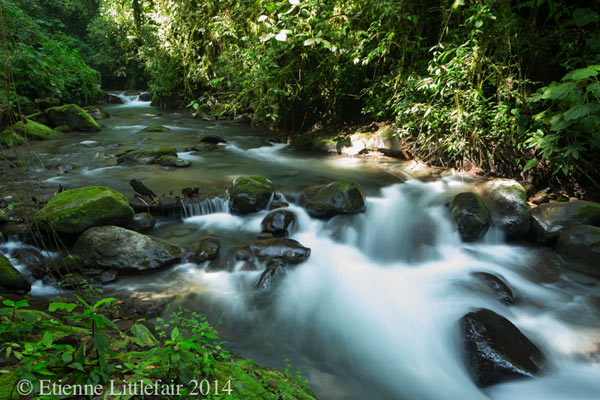 With continued investment from both tourists and research groups such as Operation Wallacea and Sussex University, gladly, the local community, the forest and the wildlife of Santa Lucia are likely to prosper long into the future. The reserve is one of the most successful and promising examples of sustainable community based conservation that I have had the pleasure of visiting and contributing to. I thoroughly recommend a visit to Santa Lucia for anyone with a love of nature and the outdoors.

Visit the Santa Lucia website to find out more.