Posted By Joshua S. Hill on Apr 21, 2008 in Climate Science and Research 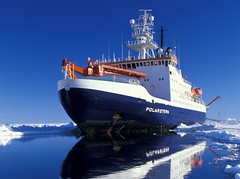 The Arctic has received a great deal of attention over the past couple of years, due to a diminishing summer ice-sheet that is expected to be all but gone within a few years. Climate fear-mongers are crying that the end of the world is nigh, sighting the opening of the Northwest Passage for the first time in known history as its proof.

However, take a trip down to the southern hemisphere – which I know, for many, is a weird idea, considering that surely the northern hemisphere is the important one – and you’ll see that life isn’t all that dire.

The Alfred Wegener Institute for Polar and Marine Research vessel Polarstern has returned to its port in Punta Arenas, Chile, after its latest expedition down south. As part of the International Polar Year 2007/2008, the Polarstern – meaning polar star – expedition ANT-XXIV/3 was focused on examining the oceanic circulation and the oceanic cycles of materials that depend upon it.

Two of the main projects in the Antarctic for the IPY took place aboard the Polarstern; CASO (Climate of Antarctica and the Southern Ocean) and GEOTRACES.

CASO’s intent was to provide “an integrated and interdisciplinary approach to understanding the role of Antarctica and the Southern Ocean in past, present and future climate.” Under the leadership of Dr Stephen Rintoul and Dr Eberhard Fahrbach, the team of 58 scientists from ten countries were on board the Polarstern to study ocean currents, distribution of temperature, salt content and trace substances in Antarctic sea water. 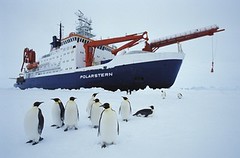 "We want to investigate the role of the Southern Ocean for past, present and future climate," chief scientist Fahrbach said. The sinking water masses in the Southern Ocean are part of the overturning in this region and thus play a major role in global climate. "While the last Arctic summer was the warmest on record, we had a cold summer with a sea-ice maximum in the Antarctic. The expedition shall form the basis for understanding the opposing developments in the Arctic and in the Antarctic," Fahrbach said.

GEOTRACES on the other hand, is an ‘international study of the biogeochemical cycles of Trace Elements and Isotopes in the Arctic and Southern Oceans.’ Under the helm of Ed Urban, Ph.D., Robert Anderson and Gideon M. Henderson, their mission was – to quote from the official GEOTRACES website – “To identify processes and quantify fluxes that control the distributions of key trace elements and isotopes in the ocean, and to establish the sensitivity of these distributions to changing environmental conditions.”

The GEOTRACES mission onboard Polarstern was only one of several, the majority taking place in the northern hemisphere. However in their results from the Southern Ocean, the team found the smallest iron concentrations ever measured in the ocean.

The Helmholtz Association of German Research Centres press release noted that “As iron is an essential trace element for algal growth, and algae assimilate CO2 from the air, the concentration of iron is an important parameter against the background of the discussion to what extent the oceans may act as a carbon sink.” 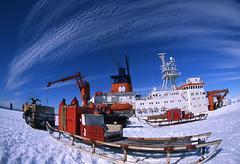 Not surprisingly, these results – from both GEOTRACES and CASO – are only preliminary, and nothing solid will be able to be taken from them for a few years. Oceanic changes must be measured over several years, and also differ spatially, thus the data acquired during this latest Polarstern expedition are not enough to discern long-term developments.

This is why part of the Polarstern expedition was to leave behind more automated buoys.

"As a contribution to the Southern Ocean Observation System we deployed, in international cooperation, 18 moored observing stations, and we recovered 20. With a total of 65 floating systems that can also collect data under the sea ice and are active for up to five years we constructed a unique and extensive measuring network," Fahrbach said.

Either way, over the next few years, the Polarstern – in tandem with scientific teams from around the world – is going to be a focal point of research that will hopefully, provide us with answers to help protect our planet.