Home » Climate Science and Research » Another Look at An Inconvenient Truth

Another Look at An Inconvenient Truth

Posted By Joshua S. Hill on Apr 28, 2008 in Climate Science and Research 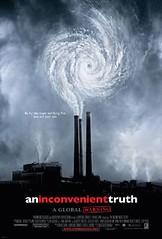 Despite what some may attempt to have you believe, not everyone is an expert on global warming or climate change. In fact, you’ll know how to spot an actual expert when you hear someone say “we simply don’t know.”

Reality is a cold splash of water, and when it comes to Earth’s current environmental crisis, no one has a full idea of what is going on.

That may be a surprise to some of you, especially if you have watched An Inconvenient Truth. Al Gore’s Academy award winning documentary on climate change has reshaped the way people look at the environment around them.

AIT provided a very clear, cut and dry perspective of what some believe is happening to our planet at the moment. You walk away from the movie entirely certain that you’ve somehow doomed the planet to an early death, even though you’re not 100% certain how.

So, just under two years since it was first released in New York and Los Angeles, GeoJournal has combined a forum of experts to give their take on the hotly contested movie; five scientists, five different opinions, from five different scientific perspectives.

The journal was opened by Steven M. Quiring, whose introduction was entitled “Science and Hollywood: a discussion of the scientific accuracy of An Inconvenient Truth.” An assistant professor in the Department of Geography at Texas A&M University, Quiring overviewed the following articles.

Less of an opinion piece than the others, Quiring simply focused on what AIT has actually done for the climate sciences. He notes that “although scientists do not view Hollywood as the best way to communicate accurate scientific information, it is hard to ignore the impact that AIT has had on the general public.”

He points to the accolades that AIT has garnered since its inception, and then rightfully sums up what many have suspected; “Whether scientists like it or not, AIT has had a much greater impact on public opinion and public awareness of global climate change than any scientific paper or report.”

Though the five authors whose papers follow Quiring’s introduction do not unanimously agree on every point, they do adhere to his overall view that AIT has had an affirmative impact. All of the authors agree that AIT does an excellent job in raising public awareness, but they also note its flaws, especially in its almost gleeful attempts to prove global warming using specific events, such as Hurricane Katrina.

Other unanimous agreements center on Gore’s focusing on anthropogenic causes of climate change, rather than looking at natural variations which could be attributed to global warming, or contributed too.

As Quiring notes, “the focus of this forum is to address whether AIT accurately presents the scientific argument that global warming is caused by human activities.” Though AIT was not necessarily intended to present the scientific argument, but rather to inspire action, the necessity to look at the basis behind Gore’s desire for action is important.

Over the next week or two, I will be looking at the five articles which were part of GeoJournal’s look at AIT.

“Another look at An Inconvenient Truth” is written by Eric Steig, who teaches environmental earth science, isotope geochemistry and paleoclimatology as associate professor at the Earth and Space Sciences department, University of Washington.

“An Inconvenient Truth: blurring the lines between science and science fiction” is written by Roy W. Spencer, a principal research scientist for University of Alabama in Huntsville. In the past, he served as Senior Scientist for Climate Studies at NASA’s Marshall Space Flight Center in Huntsville, Alabama.

“An Inconvenient Truth: a focus on its portrayal of the hydrologic cycle” is written by David Legates is the Delaware State Climatologist, and an associate professor at the University of Delaware, who is best known for his contrarian opinion on the causes and effects of global warming.

“An Inconvenient Truth: the scientific argument” is written by Dr. John W. Nielsen-Gammon, who is the Professor of Meteorology at Texas A&m, as well as being Texas State Climatologist and Associate Director at the Center for Atmospheric Chemistry and the Environment.

“An Inconvenient Truth and the scientists” is written by Dr. Gerald North, who also serves at Texas A&M University as the Distinguished Professor and Holder of the Harold J. Haynes Endowed Chair in Geosciences.