Home » Climate Science and Research » Another Look at An Inconvenient Truth: Part 2

Another Look at An Inconvenient Truth: Part 2

Posted By Joshua S. Hill on May 1, 2008 in Climate Science and Research

I now feel qualified to take the next step in our look through GeoJournal’s AIT forum, having just heard back from author Eric Steig about an aspect of his entry “Another look at An Inconvenient Truth” that had me baffled.

Steig, who teaches environmental earth science, isotope geochemistry and paleoclimatology as associate professor at the Earth and Space Sciences department, University of Washington, was first off the blocks in GeoJournal’s look at the science within AIT.

As the Springer press release upon publication of this journal (they were a few months late, as the September edition was published mid-April) points out, Steig believed that Gore and AIT got the fundamental sciences right. The few minor factual errors that were made, Steig believed, did not undermine the main message of the film.

My personal copy of Steig’s paper is highlighted to all hell and back, and as such I’m going to work through it for those not lucky enough to have press credentials to acquire these articles, or the money to purchase them.

Steig opened up pointing to the question that he would attempt to answer; does AIT accurately portray the science of climate change.

A writer at RealClimate.org, Steig has already gone on record as being in the affirmative column for this question, and noted in his review that “for the most part … Gore gets the science right.” Stepping in to this journal entry though, and having watched the movie three times, Steig once again qualifies that opinion by saying that “there are certainly aspects of the scientific content of the film that could be improved.”

Steig disclaimers anything he will say though with reiterating that Gore got the fundamentals correct. “The increase of greenhouse gases in Earth’s atmosphere … is relentless. The direct impact of increasing greenhouse gases is to warm the planet’s surface. Feedbacks … make it very likely that the amount of warming wil be greater than the direct effect from greenhouse gases alone.”

My job here at Blog Mongabay is to bring a measure of layman’s understanding to a topic that is, at its very core, oh so very not lay. This is not elitism on my part, as I spend many hours scouring the internet and reading information to condense and accurately portray what the scientists are saying.

I have for a long time believed that, as Quiring hints at, scientific papers do not do a good enough job of enlightening the everyday Joe or Jo. They are intent on putting their information out there without qualification, and are surprised when they are not automatically flocked too with thankful and happy converts.

As such, there are several scientific terms that bear explaining that are frequently used throughout Steig’s article.

The first is “sea ice albedo.” That Microsoft Word doesn’t recognize the word albedo is no surprise. Albedo is the extent to which an object diffusely reflects the sunlight, or, the extent to which an object reflects the light at a number of different angles. So, when attached to the words “sea ice,” this naturally refers to sea ice’s ability to reflect sun rays, which subsequently diminishes the amount of heat affecting our planet. 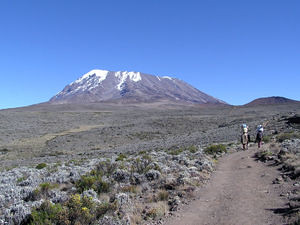 There is a point within the movie where Gore shows a number of images of glaciers, including glaciers atop Mount Kilimanjaro and the Columbia Glacier in Alaska. Steig points out that, “while both have retreated dramatically … in neither case is temperature change likely to be the culprit.”

“In the case of Kilimanjaro … changes in precipitation and … changes in cloud cover have altered the ratio of precipitation to sublimation that determines whether Kilimanjaro’s glaciers grow or shrink.” This evidence is credited to Dr. Thomas Mölg and D.R. Hardy, in an article written for the University of Innsbruck’s Geographie Innsbruck publication (PDF).

Within, Mölg and Hardy explain the marked difference in surface ablation on Kilimanjaro’s surface as a result of surface albedo, which depends upon precipitation amount and frequency.

Another example is Gore’s statement that you can visibly see the effect that the United States Clean Air Act has had on ice cores in Antarctica. According to Steig “one can neither see, nor even detect using sensitive chemical methods” any evidence in Antarctica of the Clean Air Act. Steig once again points to outside sources, this time, Michel R. Legrand and Séverine Kirchner, who wrote a paper for the Journal of Geophysical Research back in 1990 looking at the origins of nitrogen oxide at the South Pole. Their conclusion was that “…NOx production in the upper stratosphere, mesosphere, and thermosphere does not contribute significantly to the antarctic NO3 budget.”

Steig notes however that the “general points” that Gore is attempting to make in these examples are not in dispute. “Mountain glaciers are in retreat worldwide … likewise … changes in U.S. atmospheric … are clearly recorded in ice core records from Greenland.” 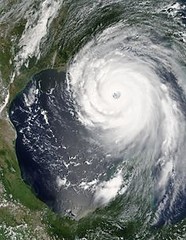 If you have followed the criticism’s laid at feet of AIT and Al Gore at all, you will have no doubt come across the fact that Hurricane Katrina should not be the poster child of Gore’s case. Steig notes that, “as scientists are fond of pointing out, no single weather event can be attributed to global climate change.” In other words, it is only the “likelihood of such events occurring” that can be pinned on the door of climate change.

This is where Steig becomes a little too apologetic for my tastes. He seems to go out of his way to ensure that Gore is not painted in a bad light. He points to the “supplemental material supplied with the DVD of the film” as a way out for Gore, when this seems not to be the point of the paper. With all due respect, it seems to me that the majority of people have seen the movie, not bought the DVD, let along poured over the extra features.

So while Gore does somewhat make up for his misleading interpretation of Hurricane Katrina’s relation to climate change, he does it only in the supplemental material and thus, AIT itself seems to stray away from scientific accuracy in this case.

Another misstep that Gore takes is his treatment of sea level rise. In a statement that has been reiterated by doomsday reporters and environmental alarmists, Gore notes that the planet’s sea level could rise by up to 20 feet if the West Antarctic or Greenland ice sheets melted. While this is entirely accurate, what Gore fails to note is that this is unlikely to happen anytime soon. What he should have made clear is that conventional scientific wisdom puts the timescale of this likelihood taking place over hundreds or thousands of years.

Steig does rightfully reprimand Gore for this, and he adds that Gore could have pointed out that we do have a serious misunderstanding of just what is going on in our polar ice sheets. Recent changes in Greenland’s glaciers may in fact result in a glacial collapse earlier than was first predicted.

All of this being said Steig reserved his chief criticism for Gore’s handling of the science for the end. Steig points to the almost famous scene, where Gore lifts himself above the crowds on a scissor lift to follow the rising carbon dioxide levels. What he leaves unsaid is that the temperature will follow suit, rising dramatically as CO2 levels do.

Now, for the sake of brevity, Steig does not go in to much detail about this. Gore makes an unspoken link between the carbon dioxide levels found in the ice core records, and global temperatures. However, as many scientists will hasten to tell you, this correlative link is not as clean cut as Gore alludes.

As mentioned, Steig is also known for his writing at RealClimate.org. It is here that his first review of AIT is shown, as well as a much longer look in to why the link between ice core records of carbon dioxide levels in Antarctica, and global temperature levels, is not as simple as it looks.

To match Steig’s brevity, I will simply summarize his position by saying that science has depicted a lag between the rise of carbon dioxide levels and temperature levels rising; it isn’t the hand-in-hand relationship that Al Gore leads us to believe it is. However, as Steig writes in his article at Real Climate, “CO2 acts as an amplifier” of the temperature. In other words, an increase in CO2 levels will inevitably push the temperature further, though maybe not immediately. 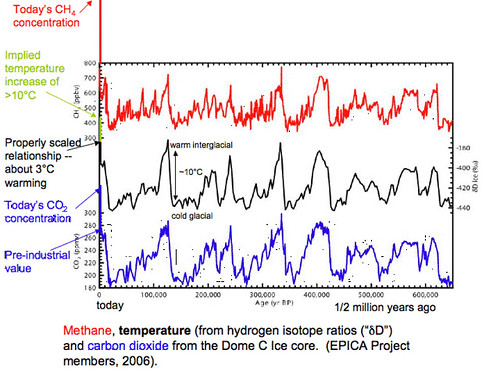 Conclusion: Mine and His

Steig sums it up simple; “An Inconvenient Truth rests on a solid scientific foundation.” However Steig provides an escape clause for Gore and his movie by adding that AIT was not supposed to be a scientific movie, but a movie of bringing people to awareness and action. As such, Steig seems to negate the necessity for actual scientific fact, in place of activism. And while for the most part, this can work in the favor of science, to ignore the science completely is unwise.

That is where people like me step in. I’m well aware that not everyone wants to know just what has caused global warming. Most of you just want it to stop, or at least, to leave you with swimming days in winter. But there are those who want to look further than just what they are being told by celebrities and the media, and that is why myself, websites like Mongabay and Real Climate, and others, all come in to the picture.