Another Look at An Inconvenient Truth Part 3

Posted By Joshua S. Hill on May 6, 2008 in Climate Science and Research

Well, it’s a week after I started this little series and I’m still only part of the way through. Seems that it will take me a little longer than planned to write, but rest safe in the knowledge that that simply means there’s research happening behind the scenes here at Casa de Hill.

The second article published in the delayed September edition of GeoJournal is written by Roy W. Spencer, who serves as a principal research scientist for University of Alabama in Huntsville. He has served as Senior Scientist for Climate Studies at NASA’s Marshall Space Flight Center in Huntsville, Alabama, and according to his Wikipedia article (he is one of the few in GeoJournal’s AIT forum to have a Wikipedia article) “…is skeptical of the scientific consensus that human activity is primarily responsible for global warming.”

So it is not surprising that straight away, in Spencer’s introduction, he notes that “…the following arguments I present will not support the supposed scientific “consensus” that exists on the subject of global warming.”

Naturally, as seems to be the general consensus – excluding those scientists on their high-horse unwilling to come down – Spencer praises the good job that AIT has done in “explaining the basic theory behind manmade greenhouse warming.” However Spencer immediately notes that AIT was single-minded in its view that anthropogenic global warming was the only possibility.

This is the tact that Spencer takes throughout his article, touching upon this undeniable onslaught “Mr. Gore”

Spencer’s first point of attack harkens back to a point also made by Steig, regarding Gore’s misleading representation of carbon dioxide levels measured in ice-cores from Antarctica, compared to temperatures. Much of what he says mirrors Steig’s arguments, regarding the likelihood that instead of carbon dioxide being directly responsible for temperature increases it may have only acted as an amplifier.

He did make one interesting point though that is worth looking at. It is summed up thus; “The third problem with Mr. Gore’s graph is related to the fact that CO2 is a relatively minor atmospheric greenhouse gas.”

This point of view has often been used to great effect against climate warriors, and for good reason. Consider that out of every 100,000 molecules of air, only 38 are carbon dioxide. Spencer strikes what would appear to be a blow by saying that “if you double or triple a very small fraction, it is still a very small fraction.” 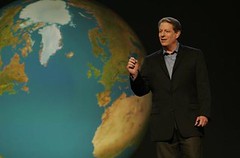 However, this point of view is somewhat misleading. The simple fact of that matter seems to be that, even though there is a relatively small amount of carbon dioxide in our atmosphere, it is not the overall quantity that matters, but the strength of what is there.

I posed this question on a science forum, as well as to various scientists that I am in contact with. This is the best analogy that came out of it; “Just because I change only 1% of the air in your bedroom to toxic nerve gas does not mean that it will have no effect and you will not be killed. It’s not the overall amount that matters; it’s the effect of the amount which is there.”

Additionally, carbon dioxide is by no means the only greenhouse gas that has increased of late. “CO2 is up more than 30%, CH4 (methane) has more than doubled, N2O (nitrous oxide) is up 15%, tropospheric O3 (ozone) has also increased,” said an expert who preferred to go unnamed. “All of these increases contribute to an enhanced greenhouse effect.”

Spencer then points to the fact that over 90% of our current greenhouse effect is actually not due to any of the toxins we pump in to the air, but water vapor and clouds. He points out then a much ignored point, that it isn’t the direct response of climate to toxins but the feedbacks that are the greatest concern, because we know the least about these.

Spencer also points out, as did Steig, that individual events are not the mark of climate change, but rather the overall pattern is; and Gore does have a nasty habit of attributing every nasty weather system to global warming.

The real question that Spencer wants answered is are the natural processes causing these events speeding up, and if they are, are humans to blame? He notes that considerable evidence has built up over the past years suggesting that glaciers have been receding since at least the late 1800’s. Examples such as tree stumps left behind which have been carbon dated to be only a few thousand years old suggest that a relatively recent period existed when glaciers were much smaller than they are now.

He spends the time to look at three specific examples; hurricanes, tornadoes and sea level rise. To hurricanes he points out that individual hurricane’s like Katrina aren’t the big deal, but rather the fact that there was so many that made landfall in the US. To tornadoes he notes that “despite the movie’s suggestion that severe storm and tornado events have increased in frequency, there is no convincing evidence of this.

When he touches on sea level rise though, Spencer seems to once again blur the edges of the facts. He notes that Gore alludes to the possibility that sea levels could rise twenty feet, and says that “even the IPCC is projecting something closer to only one or two feet.” This is a convenient truth, without any of the facts.

Gore was, possibly a little towards the alarmist side of things, suggesting that if the Greenland and Antarctic ice sheets were to melt, we would see a sea level rise of up to 20 feet. However Gore is misleading in alluding to this happening any time soon: Spencer fails to mention this, while quoting the IPCC’s theories for sea level rise for the next decade or so as opposition to this point.

On the home stretch, Spencer asks what he believes to be the key question; “To what extent is our present global warming due to humans?”

It is a good question, and one that is fairly the base of the majority of scientific debate at the moment. He points to “historical records and numerous temperature proxy measurements from around the Northern Hemisphere that suggest our present warmth is not greater than that during the Medieval Warm Period, which peaked around 1,000 years ago.”

He sums up his arguments though, by addressing the fact that AIT blames almost the entirety of the current global warming on humans, where there could be natural influences at play. “I am not claiming that recent warming is entirely natural,” he states. “I am simply disputing the view that it is 100% anthropogenic.”

I would be inclined to accept his point of view if it wasn’t for his last blurring of facts to prove his points. A big point in the media and in science recently has been the fact that the Northwest Passage opened up during summer for the first time in recorded history. Spencer however claims that the Northwest Passage has in fact opened up previously, in 1906, 1940 as well as in the summer of 07.

Now, I spoke to contacts at the USGS Alaska Science Center and the National Oceanic and Atmospheric Administration, and in addition to my own research, this is what we found. In 1905 (or 1906, records are confusing) Roald Amundsen sailed his vessel the Gjøa through the Northwest Passage 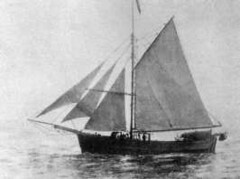 , however he was using shallow draft boats. In other words, the Northwest Passage was not traversable by any means, but by a vessel that was smaller, lighter, and less likely to run aground on the ice.

In 1940, the St. Roch captained by Canadian RCMP officer Henry Larsen made the journey, but once again in a vessel this time designed specifically for dealing with ice. Larsen was quoted as once wondering "if we had come this far only to be crushed like a nut on a shoal and then buried by the ice."

No doubt you can get a vessel through the Northwest Passage, however whether it is “open” as it was in the summer of 07 is definitely not up to debate, and it seems nothing but a sly trick on Spencer’s part to undermine.

In conclusion Spencer, as with his colleagues in the GeoJournal issue, notes that AIT deserves high praise for its job in raising public awareness. However Spencer believes that there are “simply too many examples of irresponsible misrepresentation of science to redeem the movie.” Amusing, considering how many “irresponsible misrepresentations” there were in his article.