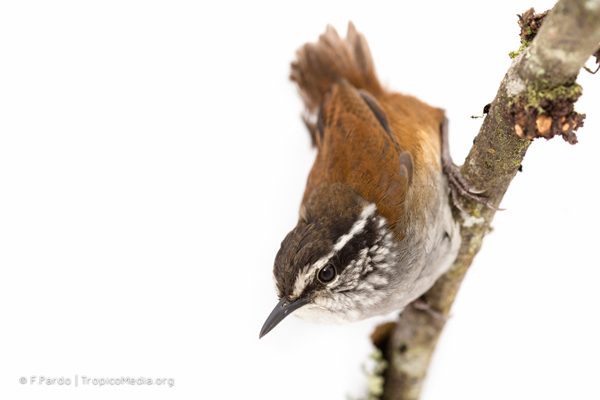 I thought of this biology quote as I photographed along side Fernando, one of the Humboldt Society’s Ornithologist, as he pulled a shimmering green hummingbird out of the mist net. Strung between skinny silver poles around eight feet tall, the black mesh nets hung through the forest trails. They stood parallel to the forest, winding 100 feet down the trail. For every foot up the pole there was a main line where the net was doubled over, which created inescapable traps for the low flying birds. Fernando freed the bird’s legs and wings and held it between his two forefingers.

One of the greatest benefits of being a wildlife photographer is the ever changing job description. Scientists and conservation groups are needing media more and more to document their research and help conserve what’s out there.

While the mammalogists, herpetologists and botanists were still asleep back in the hotel, my partner Federico  and I got up early to photograph with the birds and their scientists. We hiked through the darkness, rambling over rocks and tiny streams as the sun began to light the landscape in front of us. Through a mixture of pine and misty cloud forest ecosystems, I took long breaths. The smell of pine reminded me of my cottage in the North woods of Wisconsin. Our footsteps were muted as we crossed over pine needles and we began to hear the first songs of dawn. Orlando, another Humboldt Ornithologist, pulled out his pen and paper to write down the calls he heard, and excitedly noted their scientific names out loud. The three of us continued to walk downhill as he called back to the early birds with blends of long and short whistles.

When we met up with Fernando, he was seated on a blue tarp to avoid the wet grass with his clip board on his lap. At 11,000 feet he wore a heavy green jacket to stay warm from the wind and constant light rain produced from the cloud forest. As I took a few photographs of him measuring the beak and weight of the recently caught hummingbird, I thought of how strange it was to be taking the last photographs of it still breathing. When I put my camera down to watch him more closely, Fernando told me that he was sorry it had been such a slow morning. By this time yesterday morning they had caught nearly 10 different species already. He carefully turned each bird onto their backside and blew their feathers up and down to look for brood patches, a sign that a female may be incubating eggs back in her nest. I realized that no matter how beautiful they were, they still had bare chicken like skin underneath their colorful feathers. He placed them each into their own cotton pull string bags and the blue checkered cotton bags began multiplying, hung on a barbed wire fence behind him. Their contents rustled, but made no sound. 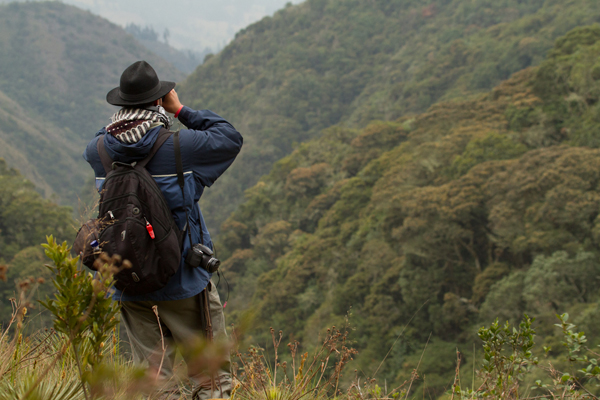 By 1:00 PM we had already put in an 8 hour day, but our two-man photography team had more studio work to do before the live animals got too weak or tired. The scientists also had a long day ahead of them. Fernando worked with his headlamp as he sat at a small desk in the temporary working space of his hotel room. The desk was covered with sheets of newspaper along with a set of tweezers, knives and a pile of cotton balls. He had the skin and feathers of a small Tanager completely off of the body, hanging inside out over the skull. In his other hand he held the innards, neatly kept together in their natural casing. He used force to crack through the neck bones against the hard desk to disconnect everything from the empty skull. Being new to the sciences, I had a lot of questions, and he explained to me how he would stuff the rest of the body with cotton, but would preserve the skull to keep its natural form. It was a clean and dry procedure as he continuously rubbed sawdust over the insides of the bird. Outside his room a group of scientists arrived from the afternoon expedition and gathered in the dark courtyard holding plastic Ziplock bags up to the incandescent lights. I began to see the silhouettes of lizards and frogs and snapped off a few candid photographs of their excitement. The mammalogists were also inspecting their three mice they had caught from yesterday’s traps. An older couple also staying at the hotel closed their room door behind them and looked forward to see the current hotel activities. The woman shrieked softly and moved quickly around the commotion. Before the night was over, we been handed several bags filled with tree frogs and lizards to photograph back in our hotel room. Not wanting to hear their struggle all night in their plastic prisons, I hung the bags of amphibians in the bathroom with a clothes hanger before going to bed.

All of the individuals from this recent collection will be researched and added to the Humboldt Institute collection in Villa de Leyva, Colombia.  A few individuals were sacrificed for the survival of their species. Without going into the field to photograph and collect plants, mammals, birds and frogs; rich and biologically diverse places may never be conserved. It is the biologists job to research what is out there, and the photographer’s job to document and help them achieve that. 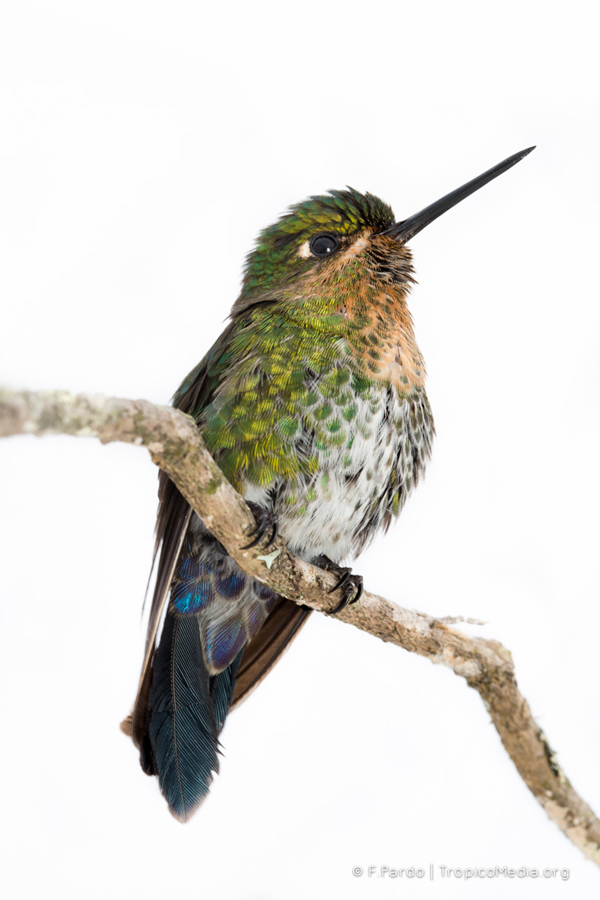 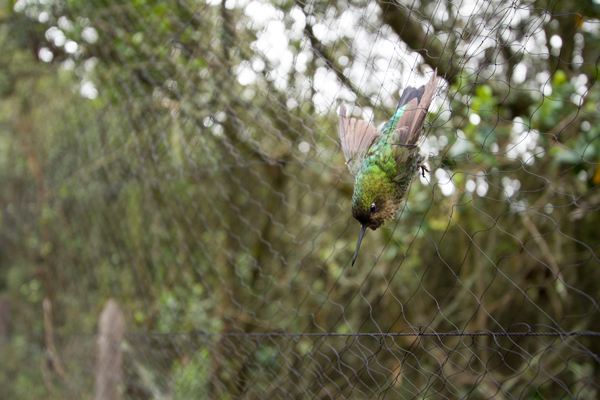 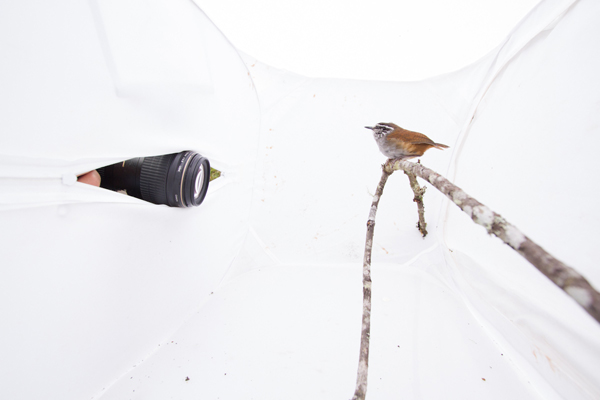 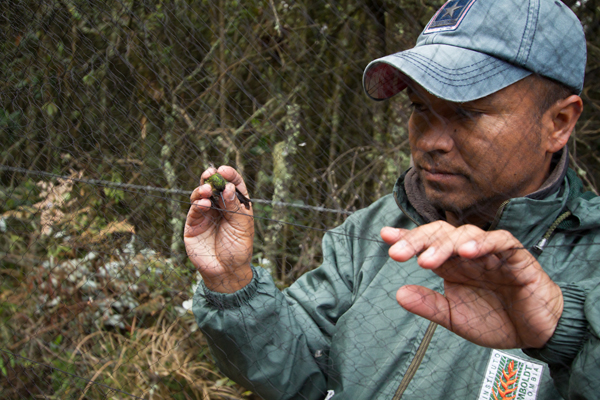 Fernando, a Humboldt Society Ornithologist, removing a hummingbird out of the mist net. Photo by Erika Skogg.