Posted By mongabay on Sep 18, 2013 in Uncategorized With rapidly rising demand for rhino horn fueling large-scale rhino slaughter, some conservation organizations have painlessly removed the horn as a preventive measure against poaching. Photo by Rhett Butler. 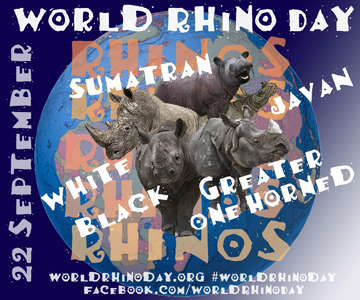 Today three of the five species are listed Critically Endangered according to the IUCN Red List and the other two are also threatened with extinction.  The biggest threats to these massive herbivores are habitat loss and poaching brought on by an increasing demand for rhino horn for use in traditional Chinese medicine (though there has been no proven medical benefits) and newer, non-traditional uses (beauty regimes, hangover cures, and wine).

In South Africa, the country where World Rhino Day originated, the rhino crisis is at its worst, having lost over 550 rhinos so far this year. Experts estimate that less than 100 Sumatran rhinos survive in the world today.

If you want to join in the World Rhino Day celebration, you can find an event near you by connecting on Facebook and visiting worldrhinoday.org. White rhino in Kenya. Photo by: Rhett A. Butler.