Climate Change in the Cloud Forest

Posted By mongabay on Oct 10, 2013 in Uncategorized

This August, my family and I spent a week and a half in Monteverde, Costa Rica.  This is the tropics, but at an elevation of 4,500 feet or so.  This well-preserved swathe of forest straddles the Continental Divide, which results in clouds and weather coming up from both the Atlantic and Pacific Oceans.  The elevation means it’s never very hot, and the tropical latitude means it’s never very cold.  The mean temperature for any month of the year falls between 70°F and 61°F (21°C and 17°C).

There is much to do here:  hiking; zip-lining; learning about how coffee or chocolate is made; and visiting bat, butterfly, frog, snake, or orchid exhibits.  But to me there are two key things that stand out.  Life and Conservation. 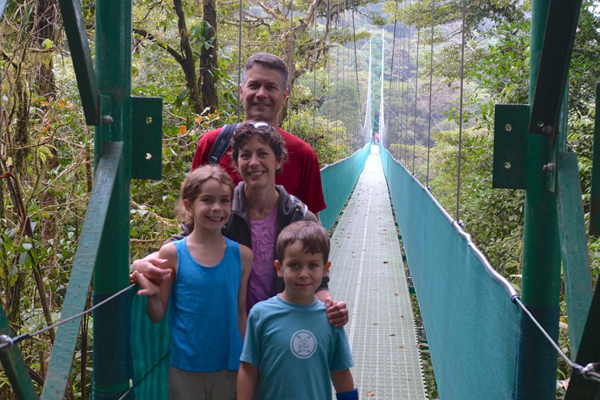 The Kraft family on a hanging bridge. Photo by Larry Kraft.

Life explodes from the earth with a huge variety of plants, trees, vines, insects, bats, birds and mammals. The misty clouds drifting up from the coasts not only give the cloud forest its name, but also nourish life above the ground.  All kinds of things grow on top of other things.  Epiphytes grow on trees and then eventually decompose, creating a microenvironment from which more life can emerge.  Some of what grows and lives in the canopy is only found there and not on the ground. 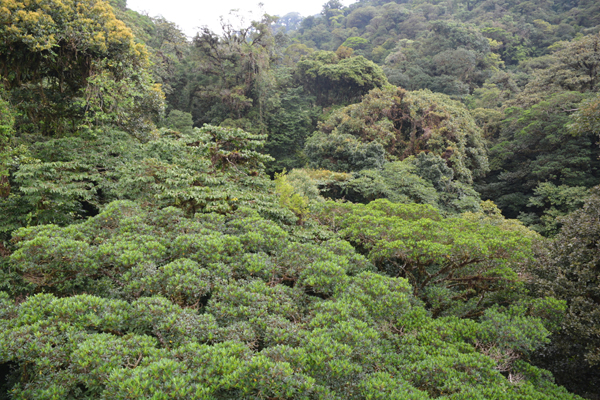 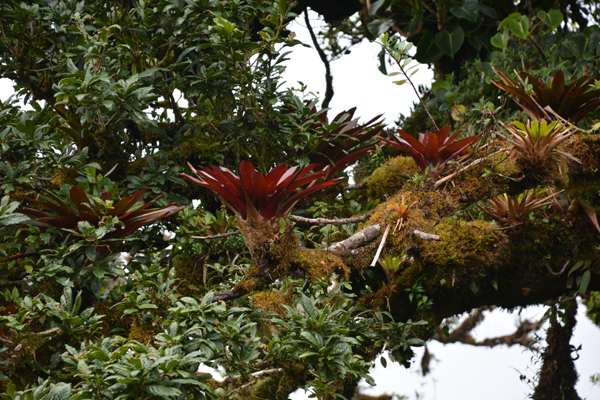 Epiphytes growing on a tree. Photo by Larry Kroft. 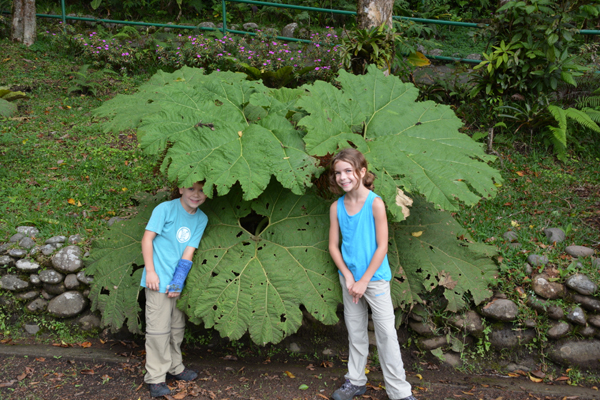 Concern for the environment can be seen everywhere.  This seems to be a place where tourism has had a positive impact.  Every tour operator here touts its environmentally-friendly practices.  Many explicitly mention that a portion of money spent goes towards preserving the forest or improving the situation for some type of animal. Sorting bins for different kinds of trash and recycling materials can be found at nearly every hotel.  Composting seems to be practiced by many, if not most, homes.  And as the primary business in the area is eco-tourism, the community’s livelihood depends on conservation.

On the surface, it seems an unlikely place to see impacts from climate change.  But dig a little deeper and ask questions of the locals, and interesting anecdotes emerge.

One local told us that you used to be able to set your clock by the heavy, daily rains in the rainy season.  We were there during the rainy season, and for the most part, had lovely weather with sun and minimal rain on most days.  The area has had more than one recent year with not enough rain.  This causes multiple problems, including water shortages within the community itself, insufficient water for farms downstream at lower elevations, and energy issues.  Seventy-six percent of Costa Rica’s energy comes from hydroelectric power, much coming from this watershed. Our Spanish teacher told us of energy shortages and power outages occurring in these drier years.

Though there have been some years with not enough rain, the total amount of rain, on average, is actually trending higher.  But the rain is falling differently.  There are more frequent and longer-lasting dry spells, followed by larger downpours.  Plus the ever-present mist, which gives the cloud forest much of its unique flora and fauna, is actually starting to drift in at higher elevations.

In a conversation with J. Alan Pounds, world-renowned amphibian and climate researcher, and a resident scientist at the Monteverde Cloud Forest Preserve, he noted that the dry spells and reduction in mist are already having significant impacts on many species.  As of late, he has been studying orchids, of which there are more than 500 species here–more than any other location in the world.  And he is noticing significant stresses on these beautiful plants.  Quite simply, they do better when there are clouds in the cloud forest. 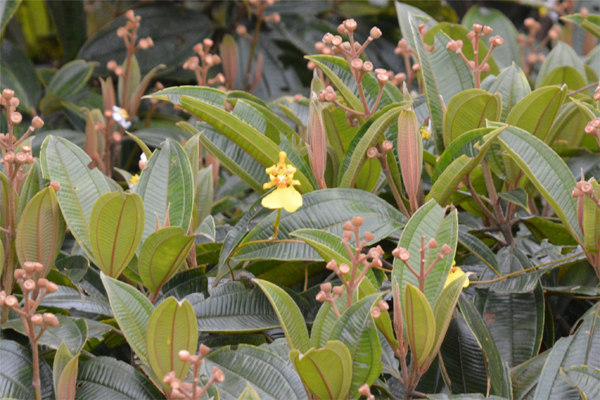 Equally worrisome is what’s happening with animals.  One of the founders of the Children’s Eternal Rainforest, Bob Law, and one of the park rangers there, Wendy Brenes, told us they were beginning to see lower elevation species at higher elevations.  In the Monteverde area, they are now regularly seeing the chestnut-mandibled toucan and keel-billed toucan, which in prior years were only seen at lower elevations.  And they are now seeing the fer-de-lance, a deadly poisonous snake, at one of their stations in a lower part of their reserve, where previously it had never been seen.  Now perhaps this doesn’t seem like a big deal, but what happens to the higher elevation species that have no higher to go?  Eventually, they are likely die off.  And if they do, what is the impact on the ecosystem? 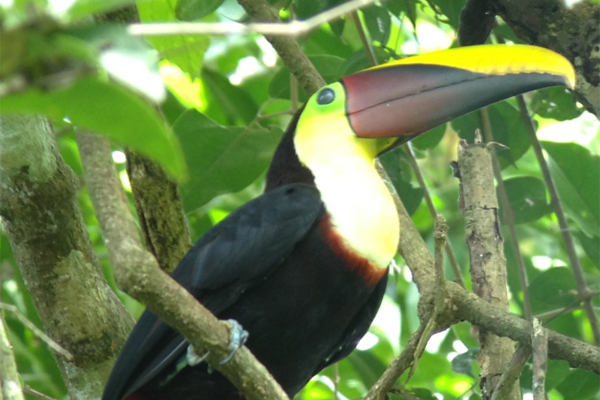 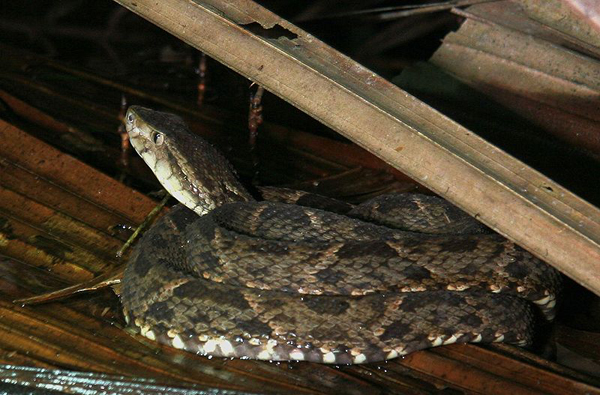 We heard rumor of a massive amphibian die-off, which I confirmed in my conversation with Alan Pounds.  In papers published from 1999 through 2006, he showed that warmer temperatures allowed a certain type of fungus to flourish (chytridiomycosis) that completely wiped out certain species of frogs, including the golden toad, from the Monteverde area. 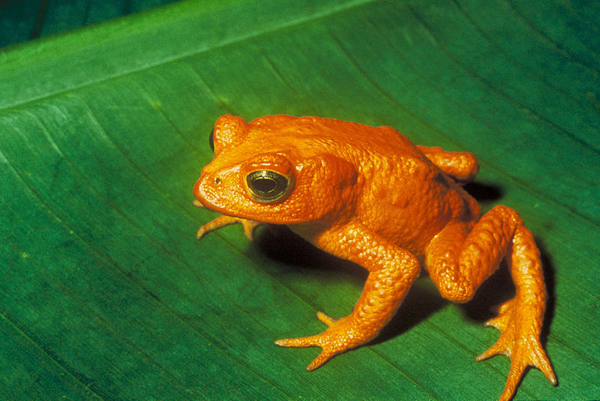 One of the things you realize pretty quickly is how incredibly connected and balanced everything is in the cloud forest.  If one part of this ecosystem is disrupted, what does it do to the other parts?  And since the cloud forest is so connected to the well being of the people here, and in the rest of Costa Rica, how will people be impacted?  What new fungi or other diseases will suddenly be able to flourish in different environments, and will they attack frogs, the food we grow, or perhaps even people directly?

The people of Monteverde and Costa Rica can be seen as a microcosm of the overall impact of climate change on humanity. We’re in the midst of a grand, rapid, and dangerous experiment.  The climate and earth will adapt to the changes we are causing, but the question is:  will humanity be like the animals at the top of the mountain in Monteverde?

There is a bit of a counter-culture feel in Monteverde.  In spite of the remoteness of the area, the focus on conservation, and the feeling of apartness from the politics of the West, climate change is a great equalizer.  There really is nowhere in the world where one can escape from the impacts of climate change.

Larry Kraft is a former high-tech exec, now traveling the world with his wife and two kids on an environmentally-focused trip.  In addition to teaching their kids, Larry and his wife Lauri are creating educational content for their kids’ school, Peter Hobart Elementary School in St. Louis Park, and the 85,000 kids that follow the Wilderness Classroom, a non-profit with whom they are partnered.  Larry is also a Climate Reality Leader, having been recently trained by Al Gore and his Climate Reality Organization.  His first trip around the world was solo with a backpack in 1990/91.  He’s since touched all 7 continents, and over 60 countries.  He can be reached on the Kraft blog, on twitter at @LarryKraft1, or via email at lkraft [at] hotmail [dot] com.