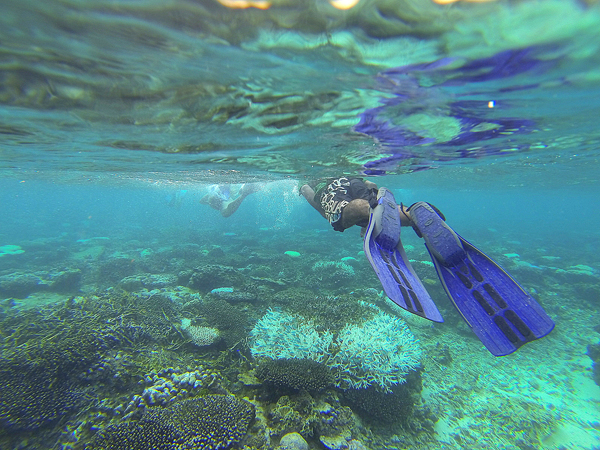 Fijians communities are largely in charge of managing their waterfront. Volunteer fish wardens in the village, appointed by the chief or the Minister, are the only official members of a village who can legally stop poachers. Though they rarely have any equipment to enforce protection of their tabus (swaths of temporarily protected marine areas inside their fishing grounds), they are harder pressed to fight the effects of climate change. Off the Fijian island of Taveuni sits Waitabu Marine Park, which has been closed to fishing for more than 15 years, snorkelers pay to jump in the water. Although bigger fish are abundant in this unusual long-term refuge, their coral reef habitat is suffering. Temperatures hit more than 30 degrees C (86 F) for an extended period of time earlier in the year, and roughly half of the corals experienced bleaching here, ejecting their color-giving symbionts, which can be seen in this image. Shallow areas of this protected reef are also prone to decimation from increasingly severe cyclones. To add insult to injury, the reef-eating starfish, crown-of-thorns, thrives here and munches corals faster than the locals can remove them.

This photo was taken by SRI fellow Amy West who is reporting on the state of Fiji’s coral reef fisheries.