Home » Environment » The Extreme Life of the Sea – book review

The Extreme Life of the Sea – book review

Posted By mongabay on Jul 25, 2014 in Environment, Wildlife 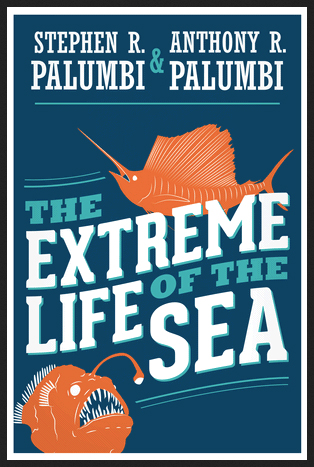 The Extreme Life of the Sea, written by father and son team Stephen R. Palumbi and Anthony R. Palumbi, is simply a tour de force, a splendid must read for any natural history enthusiast.

In The Extreme Life of the Sea, we are taken through the challenges of the Earth’s oceans. From its great depths and abysses to extreme pressures and anaerobic environments, and in each location, we learn about the remarkable creatures that live there. The Earth’s oceans teem with creatures that have antifreeze in their blood, that switch sex as they reach maturity, that are little changed for millions and millions of years.

Stephen and Anthony Palumbi bring this undersurface world to us in their personal, engaging, journalistic style that is filled with charm and excitement. As you read each page, another discovery leaps out at you, capturing your imagination and encouraging you to read more.

One such story in The Extreme Life of the Sea is the following. In 1993, an Alaskan Inupiaq Eskimo hunted a Bowhead Whale (balaena mysticetus), as allowed under international treaty. While cleaning the carcass, the individual discovered deep inside an old scar in the whale, a broken off tip from an Eskimo stone harpoon. The stone harpoon tip was estimated to be at least a 100 years old. As a result, scientists began to understand that Bowhead Whales live two to three times longer than previously estimated, well into their hundreds.

The Extreme Life of the Sea is filled with many more remarkable stories like this one. It deserves to be read and reread again obtaining a special place on the bookshelf of any avid naturalist.