Reporter’s Journal: Times are getting dark 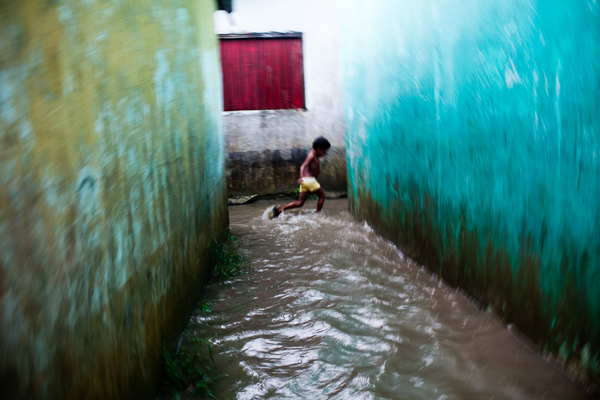 This is the season of hurricanes and heavy storms. But the archipelago of Kuna Yala, located south of the hurricane belt, is typically spared the damage and strong winds that hit islands further north in the Caribbean, year after year. In recent years, however, rains have forced the people living in these islands — an estimated 30,000 — to start making drastic changes to their way of life.
The first time we visited the island of Usdupu in October of 2009, the water came down daily, flooding the narrow dirt paths that connect all the thatched roof homes. Kids played in the brown water half-naked, without a worry in the world. But some of their parents spoke to us about being unable to cook with charcoal on the floor, as is their tradition, due to the persistent flooding. Others showed us how they were using cement debris and even trash to create landfill on the edges of the island, which is on sea level.
But then, we also noticed other, more profound ways, in which the flooding seemed to be affecting the Kuna.
One of the traditional songs performed by their wise elders, or sahilas, described their collection of islands as “coconuts resting firmly on the sand” that would never disappear, regardless of the weather. Yet starting in the Fall of 2008, after a series of giant waves flooded most of the islands, the sahilas had began singing a new song. “Why are our mothers crying?” the lyrics went. “It is because of the hurricanes and earthquakes. Times are getting dark. Who is causing this?”
Changing weather patterns, sea level rise, and man-made climate change are three new modern-day concerns that the Kuna have had to grapple with. Sahilas, men, women, and young people alike have attended information workshops focused on these issues, and the  Congreso General Kuna, the indigenous territory’s highest authority, tackles things like adaptation and mitigation on a regular basis.
This July, we’ll be returning to some of these islands to find out more about the challenges faced by the Kuna. As it turns out, the well-preserved mainland forest — that’s less than a mile away from these islands — may be an important part of the solution.