Posted By mongabay on Oct 30, 2014 in Environment, Wildlife 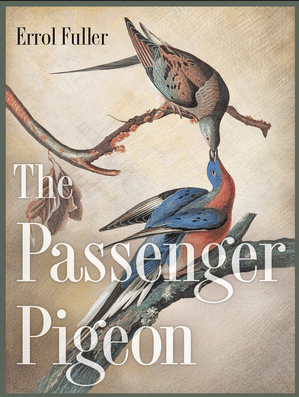 In 1800, passenger pigeons may have counted for 2 out of every 5 living birds in North America. Their flocks were in the billions. By 1914, they became extinct when Martha – the last passenger pigeon – died in a cage in the Cincinnati Zoo.

On the 100th year anniversary of her death, a new book, simply called The Passenger Pigeon, is a stunningly illustrated and rich cultural memorial to Martha – the last passenger pigeon – and to passenger pigeon’s unique ecological and cultural niche in the North America. The Passenger Pigeon is filled with haunting images and references by some of the greatest North American authors – Mark Twain, Henry David Thoreau, and others. These stories and ghostly images of a species that once numbered in the billions open up a door to time for us experience the passenger pigeon through our imaginations.

The Passenger Pigeon includes actual birdcalls written done in treble clef on a music staff and is  adorned with advertisements from 150 years ago promoting pigeons hunts and inexpensive pigeon as food.

Yet, now, as we struggle to stop a global catastrophic biodiversity collapse, are their lessons we can learn from how the passenger pigeon – a species that numbered in the billions – went extinct in a single human lifespan? When we review historical records, we can interpret how deforestation in North America, needless killing of passenger pigeons as “pests,” and the consumption of their meat led to their extinction. Likewise, in reading The Passenger Pigeon we understand the heroic efforts early pioneers of conservation went through to educate the public and conserve passenger pigeons.

Our societal hubris sent passenger pigeons by train boxcar to manufacturing plants where their feathers were plucked for mattresses and their corpses sold for 30 cents a dozen for meat .But today, scientists are debating if and should we try to bring back the passenger pigeon (Ectopistes migratorius) using modern scientific techniques. While at one point in our recent history, passenger pigeons were so numerous that the sound from an unimaginably massive flock was similar to rolling thunder and pounding horse hoofs, now we need consider what are the ramifications of potentially bringing back a species that has previously gone extinct?

While I have no opinion on this, what I might suggest is that we honor Martha and the passenger pigeon this year in the 100th anniversary of their extinction by remembering their impact on us, their place in nature, and never doing this again to any other species on Earth.