Home » Environment » A Pocket Guide to Sharks of the World

A Pocket Guide to Sharks of the World

Posted By mongabay on Jun 9, 2015 in Environment, Oceans 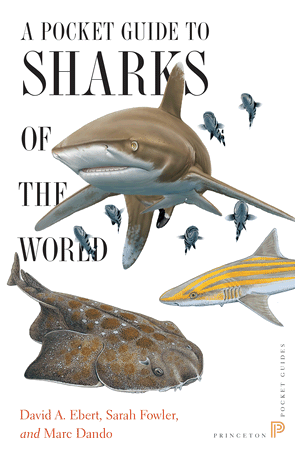 In A Pocket Guide to Sharks of the World by David A. Ebert, Sarah Fowler & Marc Dando, we learn about the 501 shark species currently identified, including the 77 shark species newly identified since 2005, that live throughout the Earth’s oceans.

Globally, there are 1200 known species of Chondrichthyes which include sharks, rays, and chimaeras. The Chondrichthyes are fish with jaws, multiple gill openings, and flexile cartilaginous skeletons. Sharks, or Elasmobranchs, are some of the most common Chondrichthyes. Sharks are highly threatened globally. Many sharks are killed as bycatch during fishery operations. While many other sharks are killed for their fins and meat by targeted fisheries. According to IUCN, roughly 50% of the Earth’s sharks species are threatened.

Elegantly illustrated in much the same fashion as well-known bird and mammal books, A Pocket Guide to Sharks of the World is a great addition to the library o both the armchair traveler, like me, who rarely travels, and the intrepid traveler, who is rarely at home.