Home » Commentary » The Rhinos of the Namib (commentary)

The Rhinos of the Namib (commentary)

Posted By Mongabay on Aug 18, 2015 in Commentary, Travel, Wildlife 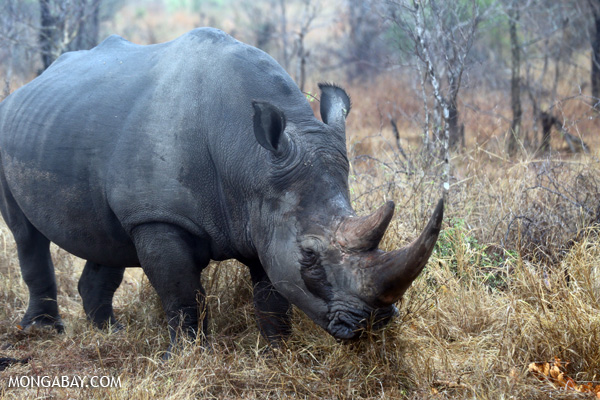 Rhino in South Africa. Photo by Rhett A. Butler

It was dusk when we followed two massive male white rhinos passing in front of our car near Etosha in northern Namibia. Lysander, just nine, was ecstatic, watching a primeval explosion of power ambling in front of our car reminiscent of the times when rhinos ruled the earth. At dusk, in the sun infused dimming amber light, the blackness of an all-presiding night was pressing upon us. Our guide’s red lights shone on the spectacle of this gold and black collision magnifying the magic of this ineffable rite. We watched spellbound as these two males jousted in a meadow turning around each other like wrestlers from a bygone age. In the theatrical splendor of the moment, their power reverberated as they had for thousands of millennia before the onslaught of human time. Later that night twelve more white rhinos moved in single file in front of our car like a procession of gladiators, armored in grey like the bedrock and soil surrounding them into the deepest recesses of that continent where mankind was born.

It lies on the far southwestern coast of Africa, a basaltic theatre of red rock carved from the skin of Gondwaland when Africa and south America were joined at the hip 180 million years ago. The last volcanic eruption erupted over this desert version of Jurassic Park when T. Rex was lord of the universe. Here slow moving solitary black rhinos browse among undulating hills and giant emerald green euphorbia bushes like grey Pleistocene tanks amidst the oldest desert on earth, the Namib. This saurian landscape could have been the place of origin for the super rhinos, Paraceratherium that once dominated the earth as the largest mammals ever to walk the Earth, so large they would have towered even over modern elephants. Now it is a race against time to save the last free roaming rhinos where they used to dominate the landscape like slow meandering soldiers across the African continent.

Recently a spate of rhino poaching has started to undermine the community based conservation efforts of one of Africa’s great success stories. Cheetahs have been the bastion of Namibia’s wildlife efforts in the last generation. And the success rate has been impressive, reaching out to local farmers to work with wildlife groups to relocate and save a species that could have been lost two generations ago. But of late the Chinese influx and their near insatiable hunger for ivory and rhino horn has started to take its toll on this country of 2 million. Syndicates whose bloodlust knows no bounds have targeted the outback of this near model African nation. In Etosha, Namibia’s flagship park, about 50-60 rhinos have been poached this year. We had come to investigate Namibia’s elephants, but here in the final frontier of Africa, a deadly plague of poaching undermines the future of the third largest mammal on earth. 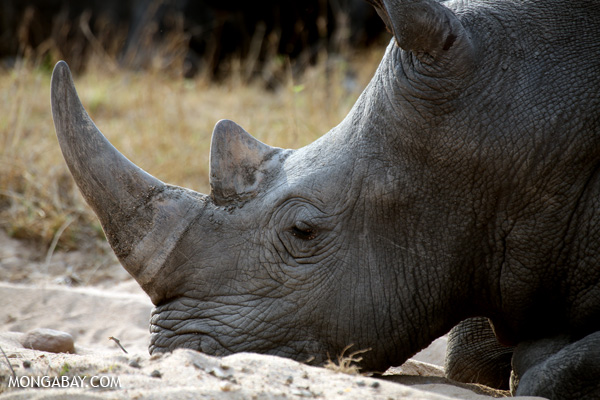 Rhino in South Africa. Photo by Rhett A. Butler

After walking several hundred yards with Augustus, and Martin crack bush trackers, in the premier black rhino habitat in the world, we found a mother rhino with her calf near a euphorbia bush. She had not been de horned of the hyper-trophy so coveted by global poaching syndicates, as many of her neighbors had, in a last ditch effort to save her species. The vainglory and superstitious insanity that drives the global commerce in rhino horn could hardly be mentioned in the outback. The prize we had come for was just to be in the presence of the fabled behemoth, a being which lurked in the imagination of our ancestors like few other. Was the rhino the fabled origin of the unicorn? This was one of the beings that haunted the cave dwellers of Chauvet and Lascaux This was a being whose blood nourished Paleolithic hunters from 30,000 years ago.

We had left our camp at 6 in the morning and targeted the springs two hours from camp, where rhinos regularly drink. En route we also found some elephant tracks which made the day all the more remarkable because no elephants had been spotted in over five months!. In the ensuing moments, the ghost of Paraceratherium, and its thundering steps, reigned over the imagination. Somewhere in the blistering outback of this primeval and heat-blistering garden of Eden, the progeny of the greatest mammals ever to walk the earth still reigned. Martin and Augustus gingerly followed the rhino tracks over a hill, like diminutive human ants, walking over the terrestrial skin of a geologic giant and waved to us that we should follow. In the distance an oryx watched our every move and eyed us with the vision of an antelope constantly on watch for desert dwelling lions. Would this lonesome antelope give us away? Would the rhino warn the rhino and precipitate her escape? The rhino must have suspected our presence but did not run away from us, we who had come so far to behold her. After a twenty-minute stint, we finally came within 300 feet of her and her one year old calf. She knew we were there and even moved a few steps on several occasions. Once, she even lay down next to the euphorbia bush that was her safety blanket, luxuriating in the shade of a magnificent bush that is one of the mainstays of her diet, and which is poisonous to most other species. We watched her partly mystified by the near perfect stillness of this gargantuan mammalian leftover from a bygone age still holding on, on the edge of the bearable world. Here was a living boulder whose very existence symbolized the precariousness of the life force and what humanity was doing to its earthly brethren. Here before us was a modern day Excalibur whose horn, its one great defining luxury, harbored the seed of its potential demise forever. In the antediluvian air that enveloped us, before the mythic magic of this ponderous but graceful monster, the heart was stilled to the pace of the eons that had preceded us. Here was a being half unicorn, half dinosaur inspired. We were mere interlopers before a gargantuan whose motive for being on this earth was as pure and stolid and free as the bedrock on which it roamed.

In Europe, in the 16th century Albrecht Durer, the great artists and lithographer, made a sketch of an Indian rhino that was shipwrecked off the coast of Italy. Some say no animal woodcut has been as influential as this piece that rocked the European imagination like few others in art history. In this solitary outpost of Namibia, a fable still haunts the living sands of a seemingly inexhaustible stretch of time, far from the madding crowd. But outside pressures are gaining on this imponderably perfect beast. In the quiet hot rage of an all presiding intelligence, known as the desert, a phantasm with a miraculous defense on its nose reminded us that this land was no place for man. More importantly, it reminded us to stay away and that if we were to lose such a fantastic being, the rocks surrounding us would no longer be a place of wilderness and would no longer constitute a place of revelation, but a tombstone for our species. There are plans to airlift many dozens of rhinos from South Africa to Texas, ironically the very place where major trophy hunting clubs reside. After the slaughter of Cecil, the lion in Zimbabwe, Africa, the US and the world should indeed rethink the policy of trophy hunting, even old rhinos, for it is a lame man’s game. The US has the money but does it have the will and the heart to stop the taking of innocent lives, whether they be wolves or elephants or lions or polar bears or rhinos? Conservation and execution are poles apart and there is much evidence to show that trophy hunters are impairing the overall populations of mammals all over the African continent and indeed the world.

The US should also do everything in its power to strengthen the endangered species act, here at home, lest visionless bureaucrats and politicians let the wilderness bleed out of the human experience. In the larger war to save the giants of the earth, the loss of the rhinos and elephants in this time is rending us into moral dwarfs. The fight is on for holding on to what is left. Their extinction, by failing the life force, would signal a prelude to our walking off the cliff of time. We are a young species, not even adolescent in evolutionary time but we are also acting as if we were senile towards everything even remotely sentient

It is appropriate that a major elephant researcher in South Africa told us that we would save ourselves by poetry and not just science. She meant that we had to find the inner consciousness and heart to transform our dialogue with the earth, with life itself. Our emotional engagement with existence has to be retrieved and immediately or why do people have children at all? It is the battle of our time. In the ravishment of sheer beholding, a single black rhino and her calf, transformed us into worshippers of the still marauding life force, moving rock and muscle become one, a giant upon the earth still bearing her sword of Excalibur upon her face, like a beacon of the incalculably wondrous.

Cyril Christo is a photographer and film-maker. He has been interviewed previously on Mongabay, including Butchering nature’s titans: without the elephant ‘we lose an essential pillar in the ability to wonder’, Ten years after Lost Africa: a retrospective on indigenous issues, and Predator appreciation: how saving lions, tigers, and polar bears could rescue ourselves.