Commentary by Laura Humes What is the last thing you ate? If it was any kind of processed food, chances are that in the ingredients list you’ ll find the words “palm oil.” According to the Rainforest Action Network (RAN), palm oil is found in roughly half of packaged foods in U.S. supermarkets. Food companies made the switch to palm oil as a cheap alternative to trans...

Commentary by Ethan Lussky When looking at a satellite image of Southeast Asia, you see white clouds dotting the sky, beautiful shades of blue hugging the coast, and a thick, green forest enveloping the land. Swirls and curves mark the Northern Highlands of Laos and Vietnam—but they are accentuated by swaths of brown. River pathways leading to the ocean—lined with brown. One would...

Why do we measure deforestation rates in number of football fields lost? This is causing major confusion.

Posted By mszotek on Oct 16, 2008 in Environment, Forests, Oceans

With most of the local corporate community “distracted” by all the financial chaos on “Wall Street”, we have chosen to delay our planned clean tech expo at the new Steinhart until the first part of next year.  However, as with similar projects, this program is more about the production process (and the working relationships that develop) then the actual event.   On that note, we have made some in-roads with...

Posted By mszotek on Aug 25, 2008 in Environment, Forests, Oceans

The event that we are working to develop at the new Steinhart / California Academy of Sciences is proceeding nicely.  As mentioned in a previous post, this event will showcase Bay Area “clean tech” and environmental initiatives with the Bay Area’s entrepreneurial community (Keiretsu Forum members …world’s largest “angel investor” group …see: http://k4forum.com ).  It looks like several...

Posted By mszotek on Aug 1, 2008 in Environment, Forests, Oceans

This blog is being written to document my efforts to develop an event at the new California Academy of Sciences (The Steinhart).  I am working in collaboration with Rhett Butler of Mongabay.com …details to follow as this event takes form.  Stay tuned!  Mark Szotek

Posted By thoumi on Jan 9, 2008 in Environment, Forests, REDD

Previously, we wrote “the land dictates the rules, and rural communities are the gatekeepers” [The Jakarta Post, December 2007] regarding how should the nascent forestry ecological service market develop. Essentially, this equates “avoided deforestation” best practices with best practices in natural resources management. To explain further, a successful avoided deforestation project is a subset of land use,...

Posted By jlhance on Jan 7, 2008 in Environment, Forests, Uncategorized, Wildlife

The Woodlark islanders struggle to stop Vitroplant Ltd from logging seventy percent of their island for palm oil plantations has received new attention from organizations and media.  The online organization forests.org has set up an action letter which anyone concerned by the issue may attach their name to have their opinion sent to 12 administrators involved.   Over two thousand people from all over the world have sent protests for... A Rainforest in France?

A study suggests that France was once covered with tropical vegetation, reports LiveScience. Writing in the Jan. 4 issue of The Journal of Organic Chemistry, researchers report “the discovery of a new organic compound in amber called “quesnoin,” whose precursor exists only in sap produced by a tree currently growing only in Brazil’s Amazon rainforest.” The researchers say the amber likely dripped from a similar tree that...

Indonesia calls for reforestation in wake of deadly floods

Posted By Mongabay on Dec 28, 2007 in Environment, Forests

Indonesian President, Susilo Bambang Yudhoyono, has urged large-scale reforestation initiatives to reduce the risk of flooding and landslides that have killed scores of people in East Java’s Madium district, according to The Sydney Morning Herald. Earlier this year the Indonesian government annouced plans to plant 2 billion trees in 2007, though it is unclear whether that goal was... 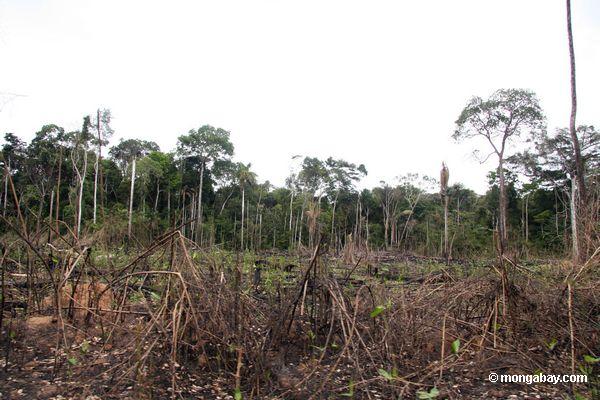 Agricultural benefits of deforestation are short-lived

Posted By Rhett Butler on Dec 26, 2007 in Environment, Forests

BBC news reports on a new study published in The Proceedings of the National Academy of Sciences that found the benefits of converting rainforests for agriculture land are short-lived in terms of soil nutrients. “US researchers studied deforested land in Mexico and found that soil levels of phosphorus, a key nutrient for plants, fell by 44% after three growing cycles. In the long-term, the land risked becoming so degraded that...