Stone dragons at Wat Phra That Pu Khaor in Thailand. Photo by: Rhett A. Butler. Click to see more photos of Wats in Thailand.

The view from the air

Posted By jlhance on Jan 20, 2011 in Forests, Photography, Photos, Wildlife Posted By jlhance on Nov 23, 2010 in Photography, Photos, Wildlife

While attention in the bushmeat trade is often given to mammals, birds–such as these songbirds for sale as food in Laos–are also eaten in many parts of the world. Photo by: Rhett A. Butler. Click to see more photos of the wildlife trade in Laos. Related Article: Laos Emerges as Key Source in Asia’s Illicit Wildlife...

Fear and conformity in conservation

Posted By Erik Meijaard on Nov 22, 2010 in Environment, Uncategorized

Conservation is like guerrilla warfare. But are the similarities flattering for conservationists? No matter how big, conventional and entwined with power conservation organizations get, they still have the posture of guerrilla groups. While conventional warfare seeks to reduce an opponent’s capability through head-on confrontation, guerrillas seek to undermine the opponents’ strength and their public support. Guerrillas... 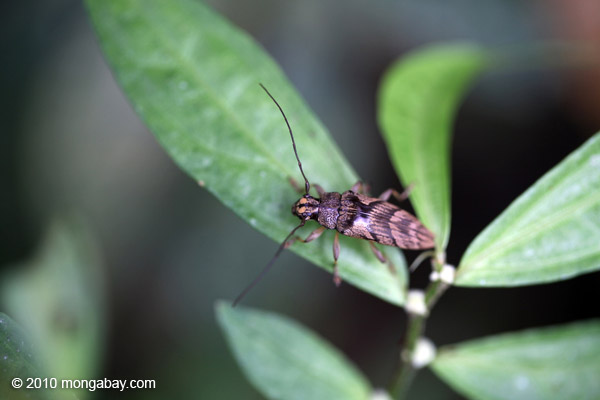 Founder of mongabay.com stumbles upon undescribed species in Indonesia

Posted By jlhance on Nov 14, 2010 in Photography, Photos, Wildlife

According to a New Guinea beetle specialist, an apparently undescribed species of Tmesisternus longhorn beetle spotted by mongabay.com founder Rhett A. Butler in West Papua. If you have information on this possibly new species, please contact us. Photo by: Rhett A....

Mongabay.com has added new photos from Sabah, Malaysian Borneo including wildlife, palm oil plantations, and landscapes. One of the few surviving Critically-Endangered Bornean rhinoceros. Known as Tam, conservationists hope a female can be found for this captive male in order to help save the species. Photo by Jeremy Hance, 2009. Sunset over the rainforest at Tabin National Park. Photo by Jeremy Hance, 2009. Palm oil plantations as...

Photo: the robes of monks

Monk robes drying in the sun in Laos. Photo by: Rhett A. Butler, 2009. More photos of the people of Laos.

Indonesia calls for reforestation in wake of deadly floods

Posted By Mongabay on Dec 28, 2007 in Environment, Forests

Indonesian President, Susilo Bambang Yudhoyono, has urged large-scale reforestation initiatives to reduce the risk of flooding and landslides that have killed scores of people in East Java’s Madium district, according to The Sydney Morning Herald. Earlier this year the Indonesian government annouced plans to plant 2 billion trees in 2007, though it is unclear whether that goal was...