Posted By Mongabay on May 5, 2011 in Uncategorized

To Celebrate Mexico’s Independence Day (Cinco de Mayo), here are some photos of beach sunrises in and around...

Posted By jlhance on Mar 21, 2011 in Photography, Photos, Wildlife

Raptor in Yucatan, Mexico. We have been unable to identify this species, if you know please contact us. Photo by Rhett A. Butler,... 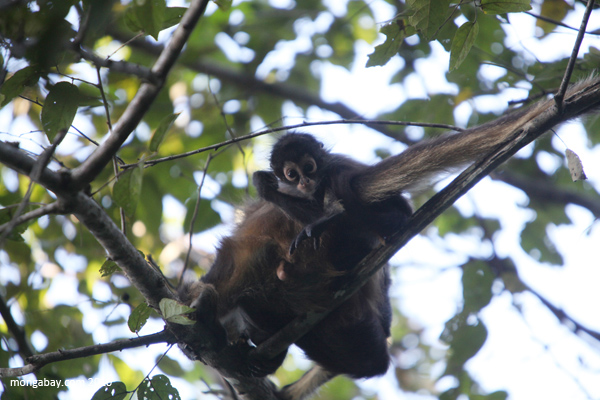 Posted By jlhance on Feb 27, 2011 in Photography, Photos, Wildlife

The Mexican spider monkey (Ateles geoffroyi vellerosus), a subspecies of Geoffroy’s spider monkey, is classified as Critically Endangered by the IUCN Red List. Surviving in Mexico and parts of Central America, the species has been decimated by habitat loss. These shots were taken in Mexico. Photos by: Rhett A....

After the 20+ hour work days during COP16 in Cancun, Mexico earlier this month, I enjoyed a couple of days out in the forests of El Eden Reserve and Punta Laguna.

Despite the massive build up of hotels in Cancun and along the Mexican Riviera, the waters off Cancun remain a stunning turquoise hue.

Spider monkey in Mexico. Photo by Rhett A. Butler Punta Laguna, between Nuevo Xcan and Coba, is famous for its population of spider monkeys.

Morelet’s crocodile in El Eden, outside of Cancun, Mexico.

I spotted this hawk atop a dead tree on the shores of the freshwater lagoon at Punta Laguna. I haven’t determined the species. Any ideas?

Posted By Mongabay on Dec 15, 2010 in Uncategorized

I spotted this neon pink planthopper in Punta Laguna outside Cancun the day after COP16 ended.

Not far from climate talks in Cancun, nature actually exists

While I spent most of my time in Cancun locked away in hotels and conference halls, this week the blog will feature some nature photos from sites in and around Cancun, Mexico.

This set includes shots of the lagoon at Punta Laguna, a 5,000-hectare reserve located between Nuevo Xcan and Tulum, the famous archeological site. The lagoon is surrounded by tropical forest, which is rich with wildlife: howler monkeys, spider monkeys, tayra, armadillo, coati, ocellated turkey, parrots and parakeets, and puma tracks.