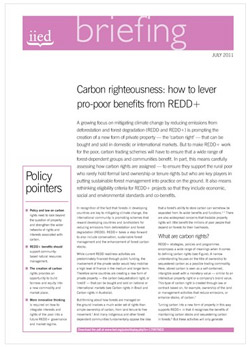 Carbon righteousness – how to ensure the poor benefit from REDD

Posted By Mongabay on Jul 12, 2011 in Uncategorized

The International Institute for Environment and Development (IIED) has issued a new reports on REDD+: Carbon righteousness: how to lever pro-poor benefits from REDD+ This briefing discusses the opportunities and challenges involved in the creation of a new form of private property that can be bought and sold in domestic and international markets — the ‘carbon right’. It looks at how equity and fairness can be built into this new...

The Tropical Forest Group, a forest policy organization, has released a briefing on California’s AB 32 Regulations, as it relates to the reducing emissions from deforestation and degradation (REDD) mechanism. Briefing Note on Proposed CA AB 32 Regulations An editorial by John O. Niles of the Tropical Forest Group can be found at: Can RED Hot California Heat Up A Sedated Cancun? (12/07/2010) In his concession speech after the...

Without oversight and safegaurds, REDD may be caught up in web of corruption

The issue of measurement, reporting and verification of carbon levels is set for the agenda at COP 16 in Cancun next month. Experts warn, however, that more attention must be given to the monitoring and reporting of REDD+ financial flows, which stand to be caught up in complex webs of corruption. There will be a lot at stake. In Copenhagen last year developed countries committed new and additional resources to forestry worth $30 billion for 2010-12, and set out to mobilise $100 billion annually from 2020 to address the needs of developing countries. If any of that money makes its way into bank accounts overseas, the money trail becomes difficult to follow.

Posted By Mongabay on Nov 24, 2010 in Uncategorized

Bloomberg is reporting palm oil companies will be big winners should any forest conservation deal arise out of next week’s climate talks in Cancun, Mexico. The article quotes members of the palm oil industry, who argue that “any UN-led accord that restricts clearing rainforest for planting more palm trees would limit the supply of the edible oil crushed from their fruit and be a boon to prices for growers.” “It’s a...

Fear and conformity in conservation

Posted By Erik Meijaard on Nov 22, 2010 in Environment, Uncategorized

Conservation is like guerrilla warfare. But are the similarities flattering for conservationists? No matter how big, conventional and entwined with power conservation organizations get, they still have the posture of guerrilla groups. While conventional warfare seeks to reduce an opponent’s capability through head-on confrontation, guerrillas seek to undermine the opponents’ strength and their public support. Guerrillas...

Posted By Mongabay on Oct 25, 2010 in Uncategorized

Posted By Mongabay on Oct 19, 2010 in Uncategorized

A new tool developed by Lian Pin Koh of ETH Zurich allows users to quickly compare the value of various forms of land use, including oil palm plantation development, logging, and carbon conservation for REDD+ payments. The web-based tool provides a rough estimate for the net present value of economic activities as well as the impact on biodiversity. The tool is available at LU...

Posted By thoumi on Jan 9, 2008 in Environment, Forests, REDD

Previously, we wrote “the land dictates the rules, and rural communities are the gatekeepers” [The Jakarta Post, December 2007] regarding how should the nascent forestry ecological service market develop. Essentially, this equates “avoided deforestation” best practices with best practices in natural resources management. To explain further, a successful avoided deforestation project is a subset of land use,...