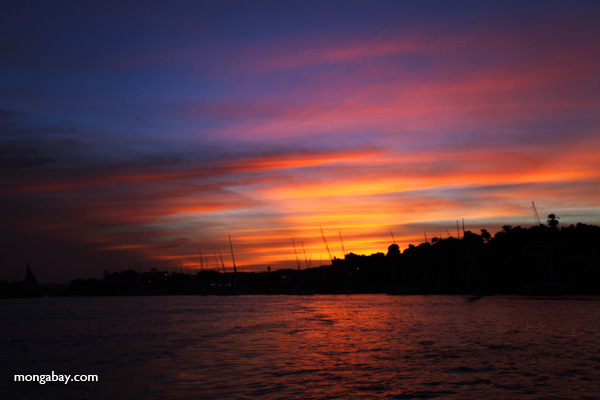 Sunset on the Nile

Posted By mongabay on Oct 18, 2013 in Photography, Photos, Travel

By Jemma Smith This stunning photograph is of the sun setting over the River Nile, which is said to be the longest river in the world with a staggering 6,670 km (4,160 miles) in length and discharges an average of 3.1 million litres of water per second into the Mediterranean Sea. It is long been disputed where the exact source of the river is, however, many believed it to be Lake Victoria in Tanzania. The River Nile travels through...

Posted By Mongabay on May 5, 2011 in Uncategorized

Vale, a Brazilian mining company that frequently touts its environmental stewardship, will invest $1.4 billion in the controversial Belo Monte dam. The project will flood nearly 200 square miles (500 square kilometers) of rainforest and impact up to 50,000 indigenous people.

Posted By jlhance on Apr 26, 2011 in Environment, Forests

Green dams in the Amazon? (video)

Posted By jlhance on Apr 3, 2011 in Environment, Forests

Video looks at how to save the Amazon in midst of rising pressure to build massive hydroelectric power in the region. WWF (with aid from Nature Conservancy) looks at what rivers must be preserved from hydroelectric power in order to keep the Amazon ecosystem thriving using ecosystem-wide modeling. For more information on dam projects in the Amazon: Bill Clinton takes on Brazil’s megadams, James Cameron backs tribal groups...

New Guinea from above

Posted By jlhance on Nov 18, 2010 in Forests, Oceans, Photography, Photos

Winding river makes its way to the sea in the lowland rainforests of west New Guinea. Photo by: Rhett A. Butler. Click to see more photos of New...